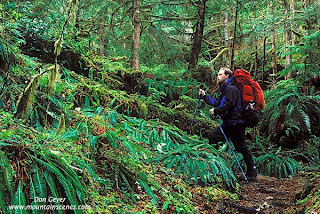 My good friend Dale McKee has joined me on many backcountry excursions, and as a willing model, has appeared in several publications.

This image in particular has appeared in three seperate publications - the latest being the Olympic Peninsual "Red Book", published by Vernon Publications. It appears as a half page layout in their latest directory.

Dale has received free copies of all publications he has appeared in, a promise I make to all who model for me (the condition being that I can secure a copy).

Other published images of Dale include high on Mt. Rainier, and near a crevasse on the Blue Glacier of Mt. Olympus.

The Fun of Preparing Prints 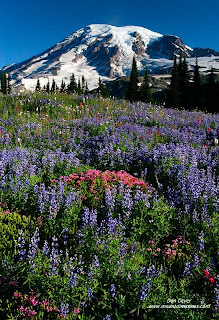 This last weekend I worked on a couple of prints for some clients, and found myself reconnecting with the images on my screen. I hadn't viewed them in a while, and I found myself reminiscing a bit.

This may surprise you, but I don't spend a lot of time "admiring" my images. Frankly, after hours of editing I need a break from them. I don't know if it is this way with other photographers; I can't remember ever asking. But it is certainly the case with me.

When I prepare prints I spend a lot of time evaluating the smallest details for correctness, which means viewing the image at 100% and viewing sections of it at time (think 16x24 image in real size on your monitor). In this case, the memory process kicked in as I remembered why I did certain things while composing the image - sizing up the scene, the placement of filters, working with the light, etc. The love affair started all over again. Not the love for the image, but rather the thought process that takes place behind the camera, which is where the fun is for photographers (it sure isn't sitting in front of the computer!) 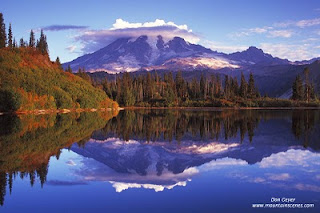 These images, though both of Mt. Rainier, were taken at much different times. The first one is from near The Skyline Trail in August during the peak of flower season. Mt. Rainier offers some of the best flower shows our state has to offer, and can be an incredible experience to witness. You also stand to find yourself in good company. I ran into John Shaw and Jamie and Judy Wild on this day.

The second image was taken in the fall (October) from Bench Lake. I beat it up the dark trail with headlamp in hopes of catching alpenglow at sunrise, reflected in the lake. As often happens, Mother Nature had different plans and partially obscured the mountain with clouds. It was my first visit to this lake, and I was fascinated by it. As I watched the scene before me warm with the rising sun, the colors on the slopes drew light while the clouds thinned around the mountain, revealing a cloud cap. This view lasted a mere 10-15 minutes before the mountain disappeared again in deteriorating weather. I drove back home in the rain.

It was fun reliving these memories.

Yes, there will be much, MUCH more Death Valley coming soon. I have gotten busy with some publishing projects, and consumed by designing my new web site. I hope to offer a sneak peak soon, and go live shortly after. Stay tuned!
Posted by Don Geyer at Wednesday, May 19, 2010 No comments: 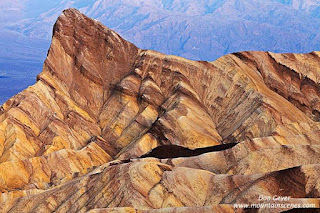 Zabriske Point has so much history associated with it, beginning with Christian Brevoot Zabriske, whom it was named after. Zabriske was the vice-president and general manager of the Pacific Coast Borax Company, which used its iconic twenty-mule teams to transport Borax from this heavily mined area (one doesn't have to venture far to run into "Danger - Keep Out" signs).

In 1970, a movie of the same title included a soundtrack by Pink Floyd and Jerry Garcia. It has served as the "surface of Mars" in Robinson Crusoe on Mars and many other sci-fi movies, and not so long ago found itself on the cover of U2's famous The Joshua Tree album. 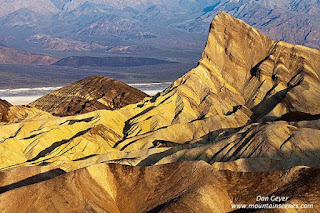 Of course, Zabriske Point is simply a beautiful place and worthy of a visit on its own merits, especially if one can time it at or near sunrise. Early light highlights the color contrasts of the area and turns much of the badlands a golden color, intermingled with darker browns. Views across eroded badlands to the prominent Manly Beacon, and across the salt flat and out to the Panimint Range. Sunsets can be attractive from here. 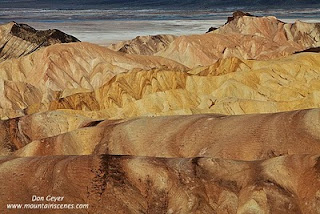 Manly Beacon is the centerpiece of the panorama viewed from Zabriskie Point. It begs for your camera's attention, and quite convincingly. It towers over the surrounding badlands as if standing guard over its kingdom.

I had hoped to catch the earth's shadow above Manly Peak the morning I visited (marked by a pink and blue layered sky), but light was filtered to the east. I also wasn't fortunate enough to have any clouds in the sky to catch turning pink at first light. But there was still plenty that interested me.

This area offers great photography before sunrise. In fact, while editing my images of the trip I realized these images taken during this time were amongst my favorites from the shoot. 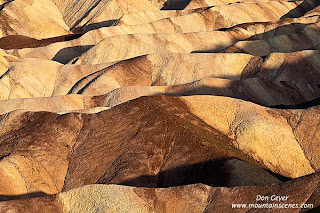 The first light strikes the area a little later than one might imagine. In fact, the badlands to the south of the view point receive light long before the area around Manly Beacon.
I enjoyed catching the first light as it swept over the area to the west, taking notice of the subtle differences in the quickly changing colors. Then I switched over to my 70-200 lens and worked at isolating various colors and patterns. There is a lot here to entice a photographer and keep the adrenaline running!

There are also a couple of trails starting from the parking lot that are worth investigating. One climbs up and runs the ridge to the north of the view point, offering fantastic and much different views of the area, especially Manly Beacon. 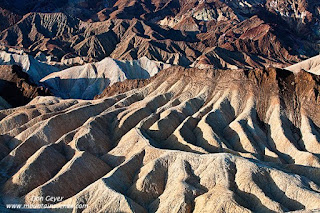 The other descends down into Golden Canyon, one of the most popular hikes in the park - and for good reason! This trail offers incredible views, including up-close personal views of Manly Beacon and Red Cathedral. I'll be sharing images from there soon.

Zabriske Point is just a short distance south of Furnace Creek along Highway 190, and one of the main attractions of Death Valley National Park. If visiting the area, make sure not to miss it!
Posted by Don Geyer at Friday, May 07, 2010 No comments: 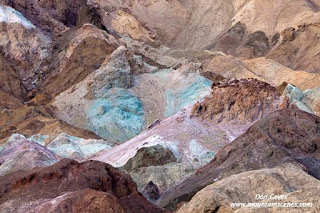 Artist's Palette is on the face of the Black Mountains along Artist's Drive in Death Valley National Park.

As the name would suggest, it broadcasts an aray of attractive colors in its rock. The colors are brought on by the oxidation of different metals; red, pink and yellow is from iron salts, green is from decomposing mica, and the purple is from manganese.

The Artist's Drive area provides evidence of one of Death Valley's most violently explosive periods, though this is not the predominant thought on your mind while viewing these colors of the rainbow. 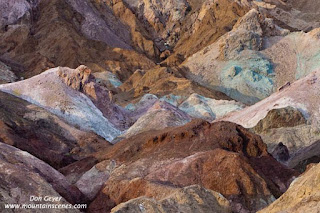 Geology and history aside, Artist's Palette is a darn right beautiful place! The contrasting palette of colors attract photographers and tourists alike, especially toward evening as the sun begins to set. This is when the colors start to pop as the light grows ever softer.

A great vantage point is on a bluff just south of the main parking lot. It's also accessible from the road shortly before the Artist's Palette turnoff. 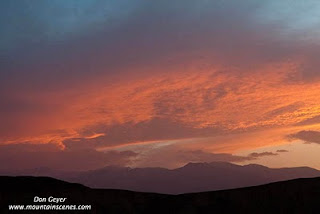 This bluff serves as an excellent place to catch sunset over the Panimint Range as well. And if you are lucky enough to catch clouds in the sky, the reward can be excellent!

Arist's Drive is a scenic one-way loop located about halfway between Furnace Creek and Badwater, accessed from Badwater Road. It rises up to the top of an alluvial fan fed by a deep canyon, and includes many sharp curves and deep dips - much like a roller coaster. 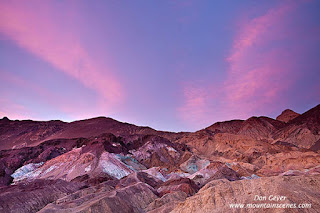 These images were all captured with my 70-200mm lense, often in tandem with a 2x telenconverter. This setup was particularly useful in isolating the patterns and colors of the rock.