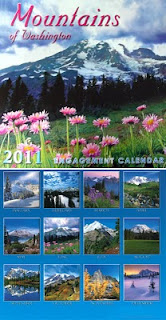 The 2011 Mountains of Washington calendar is officially out! It is available at many retail stores, including Fred Meyer and Rite Aid from first-hand knowledge. It looks like your's truly was generously given the months of March and May. The May image of Mt. St. Helens actually served as the cover in their 2009 calendar (yes, it is a repeat image).

I hope to have more product news to share in the coming weeks - check back!

This calendar will be available for purchase at my shows and from my web site. Details coming soon!
Posted by Don Geyer at Saturday, October 30, 2010 No comments: 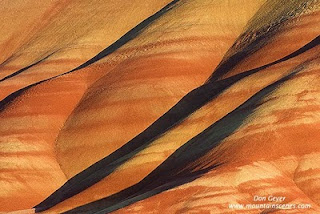 One of Oregon's most recognizable locations, the Painted Hills are a photographer's delight, offering an array of contrasting colors, appearing to have been "painted" on the hillsides. The colors change with the light throughout the day - from gold and orange to deep reds at twilight. Add some storm clouds in the sky and the scene becomes even more intense!

The Painted Hills Unit are located 9 miles from Mitchell, and 75 miles east of Bend. Flowers here typically peak in late April or early May. I missed them on this particular trip (giving me reason to go back!).

I've recently added a new gallery of these images to my web site, to include the Sheep Rock Unit, as well as a new Smith Rock State Park gallery. It was fun to revisit this trip and relive the memories. I hope you enjoy.
Posted by Don Geyer at Monday, October 25, 2010 No comments: 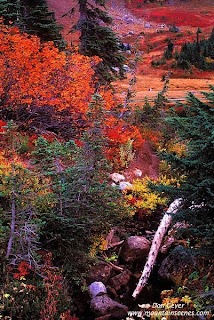 Fall is one of my favorite seasons for photography, and for many reasons. The days are cooler, foliage and needles are turning brilliant colors, and the crowds are few. There are also a lot of different opportunities.

If you enjoy reds, then the berries are for you! Their foliage can start turning in mid-September in the North Cascades - especially around Mount Baker. Early October is more likely around Mount Rainier and other areas of the Central Cascades. The nice thing about these plants is that they can pretty much be found throughout the Cascades, both east and west side.

If you like the gold of larches, then the high country east of the crest is for you, begining in the Alpine Lakes Wilderness and stretching north. Though colors can emerge in late September, early to mid-October is the better bet. Some of the most renouned areas for lyall's larch in the Cascades are the Enchantment Lakes, Ingalls Lake, the Rainy Pass area of the North Cascades and further east into the Methow. There are many other possibilities as well (see my Ice Lakes trip in the Entiat Mountains below).

As colors fade in the high country, they are just begining to pop in the lower elevations. The Columbia River Gorge National Scenic Area is an excellent visit in late October, as are the many river drainages of the Olympics - Sol Duc being my favorite. Closer to Seattle are destinations such as the Japanese Garden on Lake Washington or the University of Washington campus.

I hope this gives you some ideas for the coming weeks for places to get out and enjoy nature's show. I hope to visit Tipsoo Lake and the Paradise area at Mount Rainier in the coming days. For those of you who have my book Mount Rainier, you know these are a couple of my favorite areas for fall colors at MRNP!

Where will you be going?
Posted by Don Geyer at Friday, October 15, 2010 No comments: 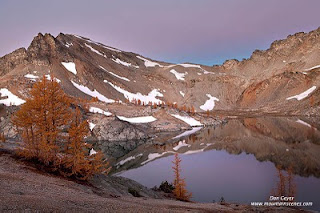 Ice Lakes are a pair of beautiful alpine lakes sitting in a high cirque above the Entiat Valley. Lower Ice Lake sits at 6,822', while Upper Ice Lake rests at 7,200'.

The hike up the Entiat is long - 28 miles round trip to the lower lake, with not much in the way of views until near the end.

I elected instead to hop the ridge from the Chiwawa River side, hiking up Phelps Creek and Leroy Creek, following the Carne Mountain high route south and climbing over the south shoulder of Mt. Maude. 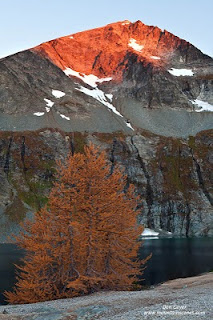 The approach from Phelps Creek involves ~4,100' of elevation gain, and involves off-trail travel and route finding skills. Throw an overnight pack on and this makes for a pretty good day! I actually lost the trail at a stream crossing below a waterfall in Leroy Creek Basin, and climbed an unecessary 800' or so into the upper basin, only to have to descend again via a loose boulder field to cross the deep "cleft" feature coming down Mt. Maude. From here cairns mark the way back to trail, which leads up to the notch in the ridge at 6,800'. From the notch, a steep climber's path climbs to the pass south of Mt. Maude at 7,600', where one can look down on Upper Ice Lake and make the easy descent down to camp.

There was only one other party camped at the upper lake when I arrived, and though I saw a few people during my 3-day stay, the numerous camps remained mostly unoccupied. I saw no one at the lower lake until the last evening, when two tired hikers arrived at sunset from the Entiat. 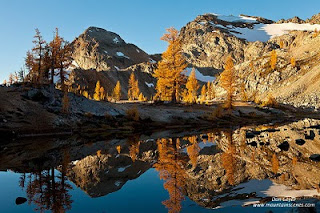 I bivied on a rock rib above the upper lake and spent my first evening exploring the area. Specifically, I tried to locate the trail down to the lower lake that is depicted on the Green Trails map. I was unsuccessful.

The next morning I awoke early and was surpised to see the upper lake holding a reflection. Upper Ice Lake is rather large - probably three times the size of lower lake. Large lakes in general can be very challenging for reflection shots as their waters aren't typically still. 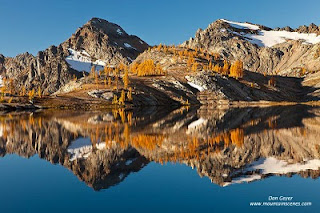 The stillness in the water didn't last for long, and soon I descended the outlet stream to Lower Ice Lake. Along the way I found a tarn holding a nice reflection (seen above).

Past the tarn, I followed the trail down to Lower Ice Lake, in view almost the entire way. The trail follows the south side of the lake past numerous scenic campsites, again all empty during my visits. At the far east end, I found a nice reflection shot (right) and found reason to relax and watch the morning sun shadows slowly begin to disappear. 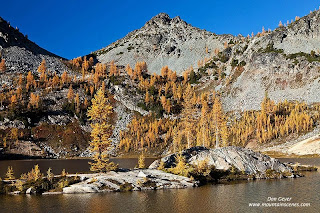 I continoued around the northeast side of the lake and located the trail that climbs up to Upper Ice Lake. It was quite easy to follow actually, and was much more pleasant than following the outlet stream. It pretty much disappears up high, so it is no wonder I wasn't able to locate while exploring my first night near camp.

I returned to the lower lake once again in the afternoon for more photography, again finding myself alone. I photographed until about 6:00 when the shadows took over the basin, then returned back to camp for the evening.

That night I fell asleep once again under stars, but was awakened at 1:30 am with rain drops on my face (I often sleep with my bivy open). By the time I opened my sleeping bag and sat up, the rain drops had turned to snow fluries. Within moments, they were gone. I experienced a couple more quick showers throughout the night, but they never lasted more than a couple of minutes. Still, they signaled a change in the weather for the next day - my exit day. 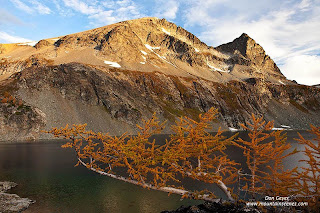 Some photography notes on the area:

Lower Ice Lake does not receive first or last light. It is best photographed mid-morning and mid-afternoon. It is the more scenic of the lakes with many more larches, an isthmus and an island.

Upper Ice Lake is excellent for first light. The water held a reflection my first morning, but did not on the second. The larches are much fewer at the upper lake.