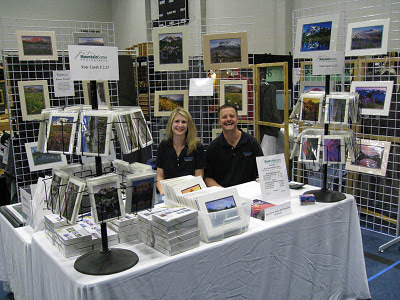 This will be our first time participating in this show, though we have been hearing about it for years.  It's one of the originals in the area, and has quite the reputation!

This will also be our last show of the year.

I've done something new for this show.  Of the dozens of new pre-matted prints I have prepared, I've included many from out-of-state destinations such as Yosemite National Park, Grand Teton National Park, Yellowstone National Park, Glacier National Park, Death Valley National Park, the Oregon coast, Painted Hills in John Day Fossil Beds National Monument, Columbia River Gorge National Scenic Area, Skagit Valley tulips and more.  I'll have way too many to display, so I plan to have more bins to house the remainder!  Some of these images have appeared in various publications, while others are completely fresh and new! 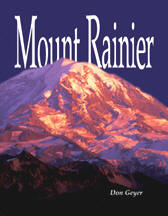 Of course, I will still have copies of my signed book Mount Rainier, individual note cards, note card sets, postcards, and poster prints for sale as well.
As I mentioned in my previous post, one of the things I enjoy most about these shows is the chance to meet new people and share stories, as well as catch up with old friends and aquaintences.  As this will be our first time doing this show, I'm expecting to see mostly new faces.
So come on by and see us for our last show of 2011!
Posted by Don Geyer at Monday, November 28, 2011 No comments:

Come see us at the Renton Holiday Bazaar! 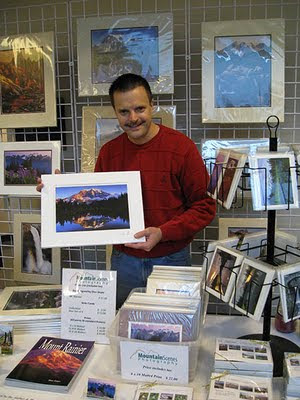 The Renton Holiday Bazaar is back for its 16th year, and I am excited to be a part of it once again!  I will have pre-matted prints, poster prints, individual and box set note cards, postcards, and my signed book, Mount Rainier available for purchase.

One of the things I enjoy most about these shows is the chance to meet new people and share stories, as well as catch up with old friends and clients.  This venue has been very successful for us in the past and we are looking forward to another great show!

Come by and say hi!
Posted by Don Geyer at Wednesday, November 16, 2011 No comments:

﻿﻿
﻿﻿ The e-mail caught me off guard.  It was followed by a confirming phone call.  My dad failed to return home from a hike on October 27th.  It was now 9:00 am the next day, suggesting something was very wrong.

Dad set out to hike the Harry's Ridge trail at Mount St. Helens National Volcanic Monument.  He picked this hike out long ago, and was excited to visit the area.

I immediately thought of the exposed section of trail where it skirts an outcrop, and wondered if he suffered a slip.  I phoned the Skamania County Sheriff's office to report him missing.  They confirmed his car was still in the parking lot, and began to mobilize their resources.

I threw most of my climbing gear into the back of my truck and, together with my brother, drove down to the Johnston Ridge Observatory.  Having had Mountaineering Oriented First Aid (MOFA) training, I was prepared to help out with the search and rescue any way I could.

We arrived to learn there would be no search and rescue.  Dad's body had already been located.  He had suffered a tragic fall of ~ 40' and sustained a massive head wound.  An autopsy revealed that he also suffered a broken leg, dislocated wrist, and internal bleeding.  Though he did not die from the impact, he died very shortly afterward.

We spent most of the day with the sheriff out in the wind and rain, answering questions, digesting information gathered at the scene, and trying to make sense of it all.  I couldn't get my mind off my mom, and how we were going to break the news to her.  She would be devastated.

I didn't realize it at the time, but I shouldered a tremendous amount of guilt over my dad's accident.  I introduced my dad to the mountains and hiking and backpacking.  He fell in love with them and we went on many, many trips together.  Safety had never been a concern with my dad on our trips.  He knew his abilities and always stayed within them.  Now I could only wonder if I had failed to prepare him in some way.  After all, I had always been there for dad.  This was only his second solo trip; his first being less than a year ago.  Both were to popular areas where he would never truly be alone.  Both were short day hikes.

When details of the autopsy were learned, it became clear that my dad's accident had nothing to do with lack of preparedness, but rather a decision he made while enjoying the moment.  He was looking for an even better view.  Bless him.

My dad had an incredible hike that day.  Upon arriving at the parking lot that morning, he spoke to a volunteer worker who couldn't get over the excitement in dad's voice.  It was a beautiful, sunny day and dad couldn't wait to get started on the trail.  He photographed his entire hike, including a herd of elk he found along the way.  I know my dad had a lot of fun this day.  The final events of his life would not have happened if he were not having fun.  He was enjoying the moment.

My dad and I enjoyed many hikes together throughout the state.  Burroughs Mountain at Mount Rainier National Park was probably his favorite, though Glacier View in the Glacier View Wilderness was a close second.  Other memorable hikes include Tolmie Peak in Mount Rainier National Park,  the Elwha and Grand Valley in Olympic National Park, Park Butte, Ptarmigan Ridge and Cutthroat Pass in the North Cascades,  High Rock in the South Cascades, and Norway Pass/Mount Margarett in Mount St. Helens National Monument.  I'm sure I am forgetting several more.

We also traveled out of state to such places as the Wind River Range in Wyoming, Grand Teton National Park, Glacier National Park, and his favorite - Death Valley National Park.  Many memories from each of these hikes/trips will remain in my head forever.  And I will always smile when I think of them.

My dad experienced a rejuvenation in life after he started hiking with me.  He stopped smoking, started eating better, and began excersizing regularly.  I never thought about this.  It had to be pointed out to me by family.

I'm proud to have introduced my dad to hiking and backpacking.  Dad was truly a different person on the trail, and you could see how much he enjoyed it.  Being able to watch the sun rise and set from our tent in the backcountry was an entirely new experience for him.  He loved it.

Dad enjoyed the forest as much as the mountain tops.  His slow pace on the trail would sometimes frustrate me, and I would encourage him to pick it up.  He never understood my hurry, and wondered why I didn't slow down and smell the flowers more.  I would try to convince him that the higher views ahead were worth hurrying for.  I never won this argument.

Dad's tragic fall took place at a location where I have photographed from many times.  These images will always have special meaning to me now.  They are of his last view.

I am equally proud to know that some of my most popular images to get published have been from trips I did with my dad.  He was always tickled to learn of a new image use agreement, and we would relive the memory of that trip.

I can't speak highly enough of the staff at Johnston Ridge Observatory.  Todd, Roger and all the others - too many names to remember. We were offered courtesies beyond any and all expectations.  They were a class act and I am indebted to them.

I would also like to thank Skamania County Sheriff Deputy George Barker for his kindness and thoughtfulness.  He was more than an officer on this day.  He was an understanding friend.