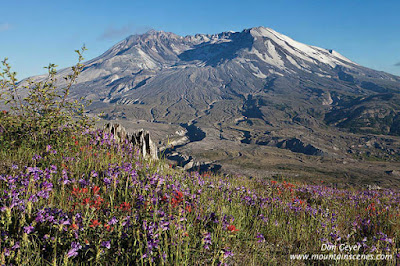 When people think of visiting wildflowers, they often think of Mount Rainier or even Mount Baker for their lavishly beautiful displays.  And rightly so - both can be spectacular!

However, there is another volcano in our state that also sports nice displays, which many probably wouldn't think of - Mount St. Helens.  While destruction and devastation largely symbolize this area in many people's minds , they might be surprised at the beauty that can be found on its lower flanks and nearby ridges all these years after that mighty eruption.  With the trees naturally cleared by nature's forces, flower seedlings have taken to many of the open, sunny slopes and turned them into beautiful meadows in season.  The difference here is that they are often set against a stark, gray landscape of pumice and ash.

The predominant flowers here are lupine, Indian paintbrush and violet penstemon.  There are many other varieties as well.

Johnston Ridge is a drive to destination with a large parking area at the visitor center at the very end of SR 504. Flowers abound all around the visitor center and recently constructed amphitheater.  There is much easy wandering here, and your pace will likely be slow!  For more flowers, walk the Boundary Trail in either direction to fully enjoy the scenery.  This area offers the most spectacular wildflower display St. Helens has to offer, in my opinion.

Windy Ridge is approached from Randle on FR 25, then following the Windy Ridge Road (FR 99) to its end at the parking lot.  While the views from Windy Ridge are jaw-dropping in themselves, a bit of exploring can lead you to even better destinations.

One of the most famous views of St. Helens is from Norway Pass along the Boundary Trail (yes, this is the same trail as the Johnston Ridge one), overlooking Spirit Lake.  You've seen it in books, magazines and calendars.  Flowers add to the scene here, and can be pretty profuse in places along the trail.  For a colorful side trip, be sure and check out the Indian Ridge Trail.

The best lupine display I have ever witnessed also resides in this area.  From the south end of the Windy Ridge parking lot, walk the abandoned road 1.7 miles to the Truman-Abraham saddle.  Stop.  Look down to a sea of purple in season!  Now take the right fork and follow the Truman Trail down the slope to see this amazing meadow up close and personal!  While the Plains of Abraham won't offer any flowers, I highly recommend it as a side trip.  To do so, return to the saddle and follow the Abraham Trail (left fork) to a world of barren world of pumice and scattered boulders.

The image above was taken from Johnston Ridge and recently appeared with an article in a German newspaper on this very subject.  To view more images of this area and around St. Helens, feel free to visit my South Cascades Gallery.

See you on the trail!

Last week I spent some time up at Artist Point in the North Cascades for some fall color and night-sky photography.  I began shooting around 10:30 or so and learned I was the lucky recipient of a half moon.  The light from the moon helped light up the forefront, making it appear almost as daylight with the long shutter exposure.

This was my first time trying out my new Rokinon 14mm lens, which I acquired specifically for star photography.  Previously I had relied on my Canon 17-40mm, which provided very disappointing quality in low light.  The difference was night and day! (pun intended!).  I'm super impressed with the Rokinon lense (also sold under other brand names such as Samyang, Pro-Optic, and Bower) and highly recommend it to anyone interested in night-sky photography.

Earlier in the day I had hiked up Table Mountain and received a message welcoming me to Internet Canada - "International rates may apply".  I quickly turned my phone to airplane mode, blocking data usage as a safety precaution.
﻿
﻿

So when more cars started arriving at the parking lot around midnight on a weeknight, I began to suspect that an Aurora Borealis alert may have been issued that I wasn't privy to.

I've only photographed the Northern Lights once before - in Jasper National Park in Canada.  The circumstances were much the same.  I got up in the middle of the night to photograph the milky way and noticed some rather bright clouds off in the distance.  I composed a shot to include them and the results came back green on my display!

The same sort of clouds were present this night, but they were so bright I figured it was simply light pollution from the Bellingham area (yes, my direction was a little off as I thought I was looking west, not north).  The stars were more numerous now, so I composed an image of Mount Shuksan once again and noticed a red plume of light in the results.  The red in the sky was not viewable to the naked eye.  Interesting!
﻿
I changed from a vertical to horizontal composition to include more of the horizon in the sky and noticed the light seemed to growing and that the funny clouds I had seen were indeed the green of the Northern Lights!  It was a good night to be out with camera in hand!

So what is the Aurora Borealis?  The bright dancing lights of the aurora are actually collisions between electrically charged particles from the sun that enter the earth's atmosphere.  The most common auroral color is a pale yellowish-green.  Rarer is the red aurora, which I was fortunate to capture for the very first time (again, I couldn't actually see it).
﻿

The Aurora Borealis is predictable as it usually follows a solar magnetic storm on the sun.  The chance of visibility is measured by the kp index.  It's a 0 - 9 numbering system known as a planetary index.  You can download a phone app to follow this, and even receive alerts when the kp number rises in your area.  I use the app "Aurora Alert" for this.  Typically, you need a kp number of 5 or greater in the Puget Sound area to see the lights.  The larger the number, the more prevalent in the sky the lights will be.

Admittedly, I am relatively new to night-sky photography and still have a lot to learn.  But I am finding it fascinating and rewarding!