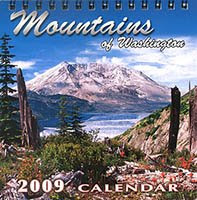 I've noticed that most stores are down to their last few copies of this calendar, and have them marked down by as much as 50%! This calendar actually appears in two versions - the one pictured to the left, the other with an image of Mount Rainier from Paradise Meadows on the cover (these images of mine also appear within each calendar). Several smaller versions of these calendars also exist. Of course, I have plenty of copies of my own calendars still available too ; )

Email ThisBlogThis!Share to TwitterShare to FacebookShare to Pinterest
Labels: Calendar, Mountains of Washington 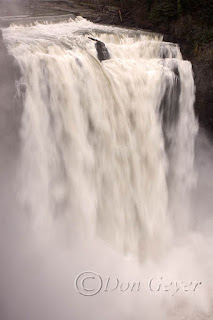 This winter saw an incredible amount of flooding throughout our region, bringing back memories of 2006 to many of us. Hardest hit seemed to be the Snoqualmie Valley and the City of Pacific, based on the images we saw on the evening news. My good friend and photographer Alan Bauer captured some excellent images of helicopter rescues near his home in Fall City. For many, the tragedy hit too close to home.

I wasn't able to get out and view some of these areas until a couple of days after the waters had started receding. Still, it was amazing. The power of the Snoqualmie River as it roared over the falls was something else.

Driving into town on the only recently opened SR-202 was also something to behold. Not because of the flood damage, but rather the fact that the river had already receded twenty feet or so in such a short time. This river didn't look the least bit threatening! I tried to imagine what it must have been like to watch the water rise.

Auburn is the town that I grew up in, so a trip down to Isaac Evens Park along the Green River seemed mandatory. My brothers and I received many scoldings (and more!) by getting caught hanging out here as kids. We were barely school age and didn't know how to swim. Add being late for dinner and having scared parents have to come looking for us, and it was not a recipe with a happy ending! Ah, but those were days long ago... 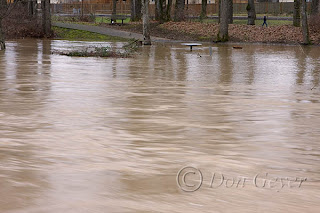 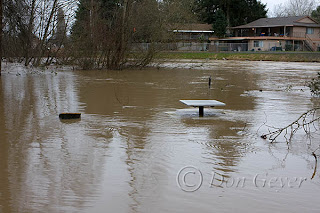 The area has changed much since those days, but the memories 0f yester-year still ran rampant thru my head as I watched the murky brown water run swiftly by.

Next was the town of Pacific where the White River had overfilled its banks, flooding the city park and neighboring community. 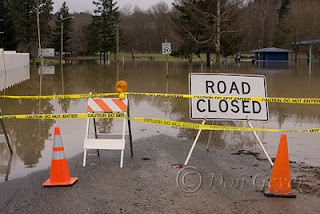 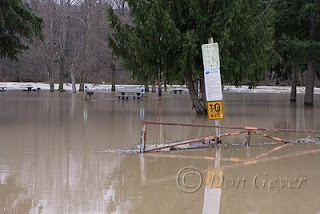 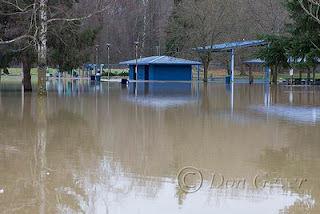 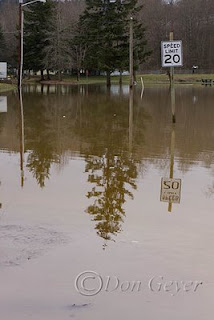 Finally, I decide to drive out to another favorite area - Flaming Geyser State Park. Of course, driving the Green River Valley from Auburn was out of the question - as I assumed it would be. So I instead investigated the Auburn - Black Diamond Road. I don't recall having ever driven this road previously, which seems strange to me. I saw a number of Great Blue Herons and enough scenery to make me want to go back. I also saw scenes like this: 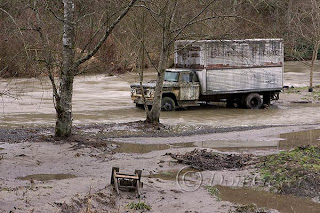 I took the detour route for SR 169 from the Auburn-Black Diamond Road, and soon found myself at the Flaming Geyser State Park entrance. It was quite a different scene from the summers I spent there as a kid. 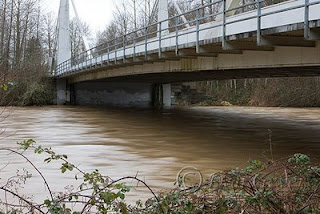 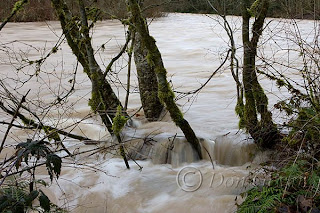 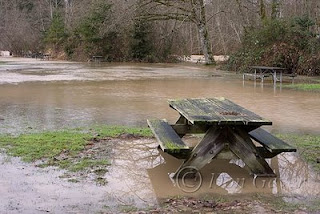 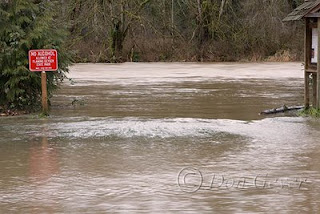 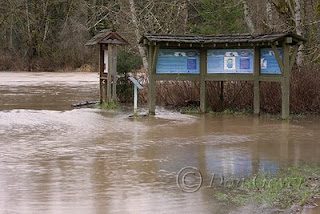 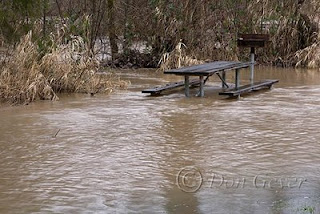 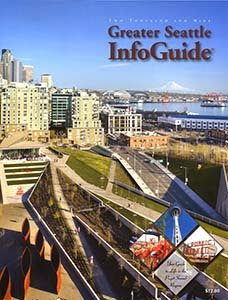 I am proud to once again be a part of the Greater Seattle InfoGuide for the 2009 calendar year. This is great "what to do" publication for out-of-town visitors and even locals wishing to experience something new. It is available at most hotels and tourist destinations around the greater Seattle area. It's well worth the price of admission!
Posted by Don Geyer at Wednesday, January 28, 2009 No comments: 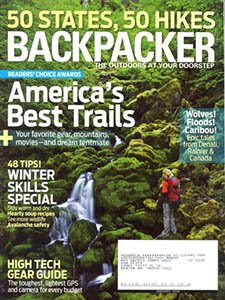 As many of you know, I have been a regular contributor to Backpacker Magazine over the past couple years. My most recent appearance is in the current January issue, available at news stands now. The image is of my good friend Dale Mckee on the Blue Glacier during my second ascent of Mount Olympus in Olympic National Park.
Posted by Don Geyer at Tuesday, January 27, 2009 No comments: 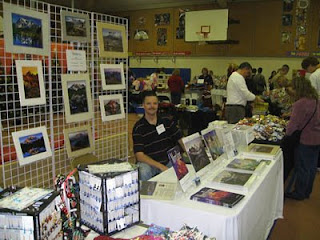 This fall we worked a number of arts and craft shows in the Kent/Renton area. This was a first for me and proved to be a lot of fun! My book Mount Rainier and both Wild West and Reflections calendars were huge hits. Pre-packaged matted prints were also popular. Most fun was meeting so many interesting people in our community. We will certainly continue participating in these events as time allows. I'll keep you posted where and when our next appearance will be, as well as what new product lines we'll be adding!
Posted by Don Geyer at Tuesday, January 27, 2009 No comments:

Welcome to My Blog!

Welcome to my new blog! Admittedly, I have fought this concept for some time now, fearing the time requirements involved in such an endeaver while battling an already crazy schedule.

However, the reality is that a lot more effort has gone into quarterly newsletters and other efforts to keep people apprised of my current events. SO, here is my new attempt at keeping you abreast of my recent and upcomming activities, projects, appearances, etc.

I will be updating this often and talking about most anything hiking/climbing/photography related. Please, check back often - and Thank You for your interest!

I also encourage you to visit my web site at http://www.mountainscenes.com/.

Finally, I would like to thank my good friend and fellow photographer Alan Bauer giving me the swift kick needed to move in this direction! Be sure and check out the link to his site at the bottom of the page.
Posted by Don Geyer at Tuesday, January 27, 2009 1 comment: