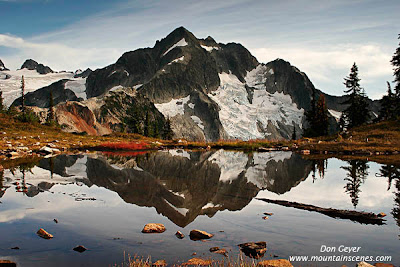 My home state of is blessed with three incredibly scenic national parks; and Olympic being the most popular ones. These well known parks attract visitors in numbers from all over the world.


Though this park is traversed by the North Cascades Highway, or State Highway 20, it is best experienced from the backcountry where one can be alone on a number of long trails, remote ridges or peaks. It's paradise for those wanting to get away and is a local favorite for many.


These mountains take the full brunt of ocean storms, receiving heavy snowfall in the winter months. As a result, they are alive with life, movement and power.


They consist of a twisted, convoluted range which rises to majestic heights of over 10,000' above sea level. At their base, rivers twist through deep gorges and valleys on their way to the .


The North Cascades are a climbers paradise, with so many remote, rugged peaks begging to be climbed. There are too many incredible vantages to be experienced in a single summer - or perhaps many.


Along with those towering peaks are destinations to the backpacker and/or cross-country traveler seeking scenic and memorable destinations. There are many to be had.


The image above of was taken during such a trip, backpacking 17 miles to , and then traveling cross-country to a high tarn near a set of lakes with incredible views of the . Elevation gain was ~ 6,100', a taxing gain with a full pack of camera gear.


I took many photos on this trip, and they remain some of my most licensed images from this magnificent park. This reflection image was recently licensed to an international travel guide, appearing as an inside image and gracing the back cover.﻿

Many more images from this fantastic park can be seen in my North Cascades Gallery, including more from this trip.

April is sneaking up on us.  And in the Pacific Northwest, that means tulip time!  The Skagit Valley Tulip Festival will be starting up soon, and it will be time to drive to Mount Vernon and visit such places as RoozenGaarde, Tulip Town, and more!

Of course, it's not too early to visit now for the daffodils!  Fields of different varieties of flowers await you, less the crowds.

The Tulip Festival lasts April 1st - 30th.  However, the best time to visit is typically about the first couple of weeks, depending on the year.  The beauty is that you can monitor their web site and know exactly when the flowers hit their peak!

My suggestion is to arrive early to avoid the crowds and minimize people in your compositions (though they can be a desirable element as well) and capitalize on early light.  If its a clear morning, the backdrop of the snow-clad Olympic Mountains can be breathtaking.

Evening photography can also be very nice, with the chance to catch pink skies to the west at sunset.

Wear rubber boots for the muddy fields.  All lenses work here and I encourage you play around with different compositions, angles and vantages.  An interesting idea is to bring a small step ladder for an even higher perspective of the fields.  I have not done this yet, but I've seen the results and they are pretty cool!

The above image was taken several years ago from the fields at RoozenGaarde under overcast skies.  It was recently licensed to a prominent magazine with distribution of 2 million, which appeared on store shelves last week.

I hope you find the time to visit the Tulip Festival in the coming weeks.
Posted by Don Geyer at Tuesday, March 20, 2012 No comments:

Rainbow over a Pot o' Gold!

Rainbows are a beautiful product of nature that capture the eyes, the heart and the imagination.

In Greco-Roman mythology, the rainbow was considered to be a path made by a messenger between Earth and Heaven.

The Irish leprechaun's secret hiding place for his pot of gold is usually said to be at the end of the rainbow.

There are also numerous religious connotations associated with rainbows.

Whatever your belief, you must admit that the spectrum of light we call a rainbow is a sight to behold and experience, especially after a storm.

This rainbow was just that, a sign that a strong storm in the Wind Rivers had come to and end, and promising drier times ahead.  It has been a popular image for me, appearing in calendars, magazines, and most recently as a cover for a world-wide published book.

This image appears in my Wind River Gallery, along with many others from the area - a true pot o' gold in Wyoming!
Posted by Don Geyer at Tuesday, March 13, 2012 1 comment: 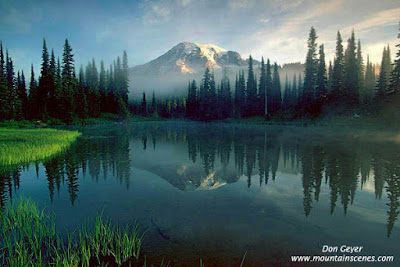 I'm excited to announce that I will be giving a presentation for the Peninsula Wilderness Club in Bremerton, Monday, March 12th at 7:00 pm.  Come out and join us!

My presentation will include a slide show on Mount Rainier and I'll talk about photographing throughout (and near) the park - including offering tips and suggestions!

I will also have signed copies of my book, Mount Rainier available for purchase.

We are going to have a lot of fun and I hope you can join us!  The event will be held at: