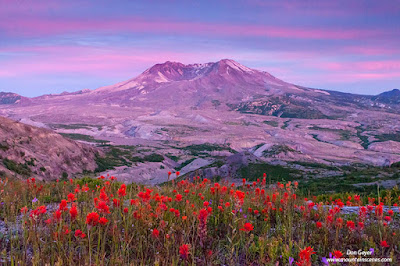 For many people, the subject of Mount St. Helens brings only imagery of devastation and destruction.  That is understandable, of course.

For me, St. Helens brings imagery of that fateful day in 1980 certainly, but also many more.  I have triumphantly stared down into the crater from the summit rim, hiked and photographed my kids on its trails for publications, enjoyed its flower show in early July, and sadly, lost my dad in a tragic fall on a late October day.  The emotions the mountain has brought me pretty much run the gamut. 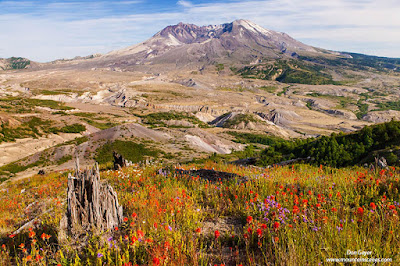 Mount St. Helens has a lot to offer, which might surprise a lot of people.  One of them is its flower show.  Yes, you read that correctly.

While most of the crowds flock to its neighbor to the north for the supreme flower shows, St. Helens proudly shows off her own display for those willing to come calling.  It's a further drive for most in the Puget Sound area, but well worth it.

This has been a very interesting year, with summer starting approximately Decemberish.  I kid, of course, but there is an element of truth to it.  We didn't have a winter.  The ski areas only opened long enough to seemingly meet the minimum requirement of days that they would not have to offer refunds (sad and unethical, in my opinion), and we never really had any measurable snow at the low to mid elevations in our state. 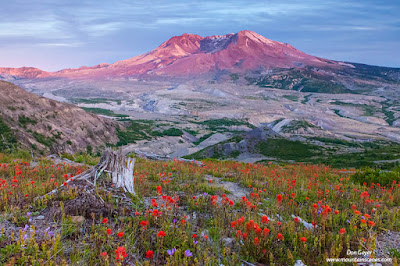 We had above normal temperartures most of the spring and early summer, shattering old records in some instances.  This cause rapid snow melt (what snow there was), and flowers emerged almost a month early on average.  I'm sure this caused great frustration for any out-of-towners scheduling vacation to be out here in late July or early August!

So the flower came early, as did access to higher level hiking trails.  Hikes that shouldn't be accessible until late July or early August were being done in early June!  It was crazy.

While the flowers came early, the displays I witnessed personally at Mount St. Helens did not measure up to normal years.  I spent time in both the Windy Ridge area and Johnston Ridge, and feel this statement is accurate for both areas. 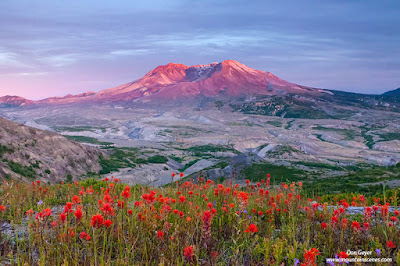 The Windy Ridge side was actually quite disappointing.  I spent time around Windy Ridge proper, hiked the Mt. Margaret backcountry to Norway Pass and to the top of Mt. Margaret, and spent an evening at the Smith Creek Viewpoint.  Flowers were scarce.

Johnston Ridge offered a far better showing, whether descending the Boundary trail from near the Johnston Ridge Visitor Center, or hiking up the trail toward Harry's Ridge or Coldwater Peak (of which I did both).  While there were some excellent displays along both areas, I've seen better showings in previous years.  Variety was mostly missing. 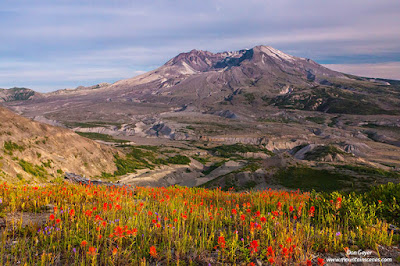 What I was treated to during my visit to Johnston Ridge were some amazing sunrises and sunsets!  Unfortunately, the highlight of these shows were not above St. Helens, but rather to the north.  Still, they were amazing.

Back to the flowers (sorry, morning and evening sky shows distract me!).  What happened once the flowers emerged?  A continued warm and dry spell, that has continued to the day I am writing this.  This resulted in the flower display being very short lived due to lack of precipitation.  If you blinked, you missed them. 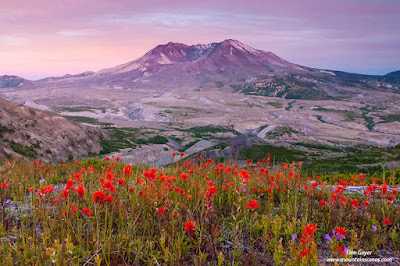 How did the flower show compare to the famous offerings at Rainier?  Well, I hoped to offer just that, but unfortunately, I cannot.  I fractured a toe at this most untimely period and was forced to take an unwanted break from hiking and photography.  However I have heard by many that the flower duration was very short there as well.  Due to our hot temperatures and lack of rain, I'm pretty confident this held true for most if not all of our state.

I hope you are all out enjoying our beloved hiking trails and enjoying this rare opportunity of great hiking weather most each and every day.  The latest forecast models for the Pacific Northwest show this pattern continuing through...wait for it....October 2016!

Hope to see you on the trail (eventually)! 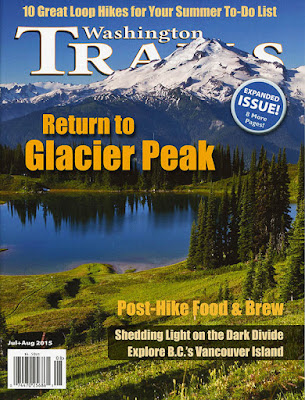 I would like to thank Eli Boschetto and the gang at Washington Trails Association for selecting my image of Glacier Peak and Image Lake for their July/August cover.

This image was taken during an amazing 5-day backpacking trip, starting and ending at Trinity, at the end of the Chiwawa River Road.  I connected Buck Creek Pass, Image Lake, Cloudy Pass, Lyman Lakes, Spider Gap and Spider Meadows on this adventure.

At the time I did this trip, access to the Glacier Peak Wilderness had restricted access from the west side due to serious flood damage along its primary access routes.  This included the Suattle River Road and the White Chuck River trail.  For hikers, this meant heading east of the crest for the easiest access to this area.

That has now changed.  After being closed for more than a decade due to limited budget, legal battles with over-the-top environmental groups, and complicated redesign plans, the Suattle River Road was opened to vehicle traffic on October 25th, 2014.  It gives access once again to 120 miles of hiking trails, including the Pacific Crest Trail (PCT).

The Suattle River Road is also a key entry/exit point for one of the most famous high country traverses in our state, the Ptarmigan traverse.  I have done this traverse several times, and am excited about doing it again in the coming years (fingers crossed!).  This traverse begins at Cascade Pass in North Cascades National Park and ends at Downey Creek along the Suattle River Road (or vice versa).

I hope you get out to visit some of the amazing scenery this area has to offer.  Hope to see you on the trail!

The Wind River Range in Wyoming is one of my favorite hiking, climbing and photography playgrounds.  The area has become considerably more popular in recent years, namely the Cirque of the Towers and Titcomb Basin areas (other areas can still be void of people!).

This image of an unnamed bluff at Island Lake was taken shortly after sunrise, very near camp.  I had backpacked in with big climbing aspirations, only to turn my ankle in the first couple miles of the hike.  With trekking poles I was able to continue the hike at a snail's pace to our destination, but that was it.  I spent the next several days resting my ankle and soaking it in the cold water in hopes of prepping it for the hike out.  It seemed to work!

This image recently appeared in a national newspaper in the U.K., supporting an editorial article about dumb hikers who injure themselves in the backcountry.  I'm kidding of course!  At least about the article content anyway.

If you are interested in the Wind River area, I invite you to view my Wind River Gallery for many more images.  I hope they motivate you to consider paying the area a visit.

As always, thanks for visiting!
Posted by Don Geyer at Wednesday, July 01, 2015 No comments: