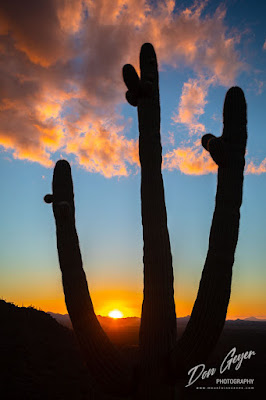 My first visit to Saguaro National Park and surrounding areas was a much different experience for this Pacific Northwesterner, whose only previous experiences were that of Utah and northern Arizona.  Needless to say, the cactuses are much smaller and different species in those regions.

Saguaro National Park is actually divided into two sections - east and west, divided by the city of Tucson.  I had never seen such a thing.

Our first outing was a trek up Sabino Canyon on what started as a rather cool and breezy day.  It was pleasant but crowded.  There is a parking fee that can be paid in cash, check or over your phone to their website. Cell phone service is hit and miss though, and I paid for parking three times for my single visit because after hitting the submit button my browser just kept spinning and never sent me to the payment received page.  I returned to the hotel to find three email acknowledgements in my inbox!

I would recommend arriving early to beat the crowds and the heat.  Definitely bring lots of water.  While our hike started out cool and breezy, it quickly warmed up as we climbed up the canyon. 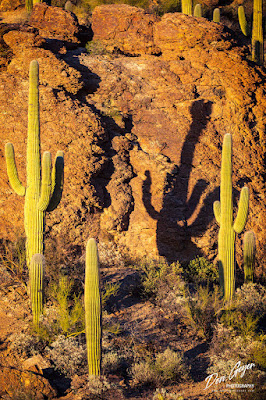 The next day I set out on a loop hike up to Wasson Peak, ascending King Canyon Wash Trail to the King Canyon Trail and finishing on the Norris Trail to the summit.  It was a very windy day, especially at or near the passes and ridgetops, and the strong breeze was cold when the sun went behind the clouds.  The views were amazing though and the few people I encountered were very friendly.
I spent as much time as I could stand on the windy summit before descending down the Norris trail back to the junction, then continued thru the notch and down an incredibly scenic stretch to catch the Sendero Esperanza Trail, which cuts back over to the King Canyon Trail Wash Trail.  However, instead of following it all the way back, I finished my descent by taking the Gould Mine Trail back down to the road and parking lot.  Glad I did!  What a fun hike!  I definitely recommend it and will do it again myself, hopefully on a warmer day.
While I did take my camera gear with me on this hike, it never came out due to the flatness of light in often overcast skies.  Lots of phone pics though! 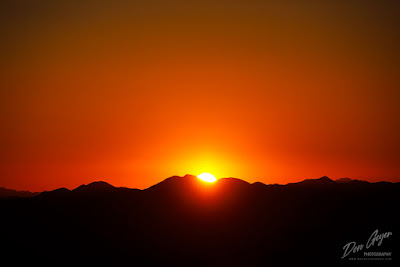 The next evening, I returned to this area to photograph sunset from an overlook I scouted the previous day - Gates Pass Overlook.  This overlook, besides providing nice compositions of Saguaro cactuses in the evening light, also offers an incredible vista to the west to watch the setting sun.  As it turns out, it also attracts a crazy amount of people at sunset, some of whom began double-parking and blocking people in rather than parking in the overload parking lot across the highway (a minute walk).
We didn't get to witness much cloud action on this night.  Those that were present in the evening disappeared before sunset.  Still, I was surprised to catch some red in the sky as the last of the sun vanished behind the distant ridge. 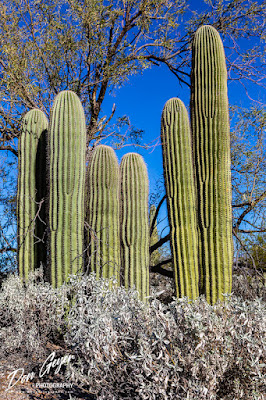 The next day began my photography trips to Saguaro National Park proper after having scouted them the day before.  I started my morning in Saguaro East, closest to the hotel and the better morning location, in my opinion.
The Cactus Forest Loop Drive in Saguaro East in a must drive!  It's a paved road that is mostly one-way thru ever-changing scenery as the elevation changes.  The Rincon Mountains serve as a wonderful backdrop thru most of the drive.  There are also many trails to explore.
That evening I returned to Saguaro West for sunset, driving the gravel/dirt Hohokam Road to The Valley View Overlook trail.  A quick hike up to the ridge scored me the silhouetted cactus image at the top of the page, and a pleasant walk out in the dark.
The next day was departure day to catch our flight home.  But I awoke to witness the most dramatic light I had experienced the entire trip!  I quickly set my camera and tripod up on the hotel balcony and began shooting away!  A storm had rolled in overnight, offering rain throughout.  But as the morning sun rose, some of its rays would sneak thru the dark clouds for a couple of moments before fading away.  My experience has been that such an occurrence is usually short-lived.  However, this went on for a couple of hours, making packing difficult!  Slowly, the sun began to win battle and it was off to the airport. 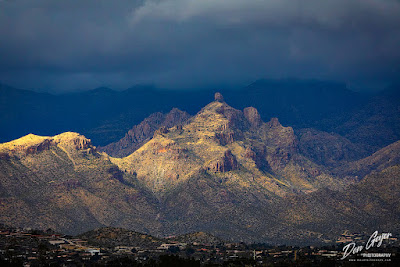 You can view these and more of my images from this area in my Southwest Gallery.  You can also see other images from my collection at www.mountainscenes.com
As always, thanks for looking!

The wild and magnificent Picket Range is a classic sub-section of the north Cascades and considered one of the most isolated areas in the continental United States. The range is typically grouped into the southern and northern range.  Both are spectacular.

Approaches to any of the mountains in the Picket Range are extremely difficult, requiring extreme off-trail travel and often technical mountaineering skills (especially the northern group) and considerable elevation gain due to their relief.  But the rewards they offer are...did I say spectacular?

The southern Picket Range's most beautiful and dramatic side is its northern slopes and faces above a wild and trail-less McMillan Cirque.  This cirque must be seen from above to be truly appreciated.  Sheer ruggedness is what usually comes to mind.  To see this side requires a long lakeside hike or boat ride and then a backpack up the Big Beaver trail.  From there one needs to know where to leave the trail (unsigned) and travel cross-country to find the creek (often river) crossing, which can be raging in typical climbing season and log crossings can be difficult to find.  Once across, jungle-like bushwacking climbing awaits the climber in order to attain higher sub-alpine slopes where travel finally eases, but the difficulties are not over.  Patches of thick slide alder must be crossed to approach Access Cirque - a common camp area.  Above this cirque are steep gullies that are often ice-filled until late in the season and require extreme care and technical gear.

The best views are on the ridges below Luna Peak, Luna Peak, or in this case the summit of Mount Fury.  It's a tough 2-3 day approach, but rewards those determined to accept the challenge.  And the photography opportunities are endless!

This image was recently licensed for worldwide us in a recreational publication, I am proud to say.

You can see this image and more from this area in my North Cascades Gallery.

Hope to see you on the trail!

Cannon Beach along the Oregon coast is a popular place to visit and an icon for Oregon tourism publications.  And for good reason!  Excellent lodging and restaurants abound in this tourist town, adding to the attraction of their world-famous beaches and parks.

Summer months can be pretty crazy at times as one might suspect.  But for photography and weather, summer actually isn't the best time to visit.

Summer brings warm temperatures for sure, but with it comes the heavy fog bank that often engulfs the coast during this time.  The fog is typically very localized, often dense on the beaches but nonexistent just a short way inland.

Spring and summer provide more favorable conditions.  Winter can also be quite favorable, as is the case here.  This image was taken in winter right around Christmas!

Speaking of tourism publications, that's exactly where this image was recently licensed to!

To see more images of this fabulous area, feel free to visit my Oregon Coast Gallery.