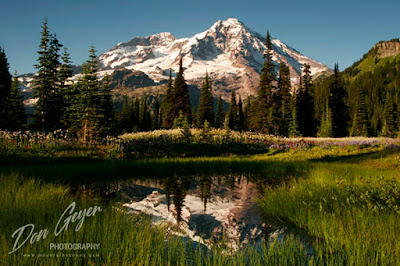 Indian Henry was the adopted English name of So-To-Lick, a Klickitat or Yakima according to many tales.  He crossed the Cascade Mountains to call the Mashel Prairie home in 1864, living amongst the Mashel bands, who were thought to be a mix of Nisqually and Klickitat descent.

Henry was known as an excellent woodsman and guide, and gained fame by guiding at least one party attempting to summit Mt. Rainier.  Henry regarded the mountain as sacred and would not attempt the summit himself.  He considered ascending the glaciers to be bad luck.  But he would lead them as far as he could and watch their horses and belongings for them while they climbed.

A patrol cabin was built here in 1915 - 1916, and is still used by park staff patrolling the backcountry.  It seems to lend itself well to the area, offering a sense of history, and its front porch offering a destination for many, wishing for a place to enjoy their lunch or munch on the numerous huckleberries in the area in season.

Today Henry is most remembered by one of his most beloved destinations on the southwest slopes of Mt. Rainier, Indian Henry's Hunting Ground.  This picturesque setting is one of the most scenic areas of the park, offering breathtaking reflections, flowers in the summer, and bright red and orange colors in autumn.  It can even be a fantastic snowshoe trip in the winter for experienced winter travelers!

This reflection scene amongst the flowers of Indian Henry's Hunting Ground embraces the beauty of the park unlike any other, in my opinion.  It's a favorite of mine, and I'm proud to say that this particular image is currently appearing in a local travel magazine in my state of Washington.  I hope others enjoy it as well.

Hope to see you on the trail!
Posted by Don Geyer at Thursday, August 08, 2019 No comments: