I've been wanting to return to High Divide for a few years now.  Of course, permits for Heart Lake and Sol Duc Park were long taken.  But I was able to benefit from a timely release of walk-up permits made available online for Seven Lakes Basin, and acted quickly!

For where I wanted to photograph on High Divide, Seven Lakes Basin was not optimum.  But it beat descending with headlamp back to the car after evening photography!

I got an early 7:00 am start on the trail, after driving over from the Seattle area.  The ascent went pretty quickly, and is incredibly scenic once above Deer Lake as one climbs and traverses through parkland meadows.  Flowers were incredible, especially once gaining the ridge and traversing to the Seven Lakes Basin junction.

The only difficulty on the trail is just before the junction where the trail has been wiped out due to a landslide, and one must follow cairns through a boulder field.  After a short climb to the notch, you are welcomed with a steep descent down to the lakes.

I spent most of the afternoon relaxing and enjoying the sun.  Around dinner time, I gathered my camera gear and headed up to the divide via the shortcut trail.

It was about 2 miles to my favorite flower meadow, pretty much overlooking Heart Lake.  It would be a headlamp jaunt back to camp and I was prepared.

The evening was enjoyable as I watch the sun set, casting pink alpenglow on the mountain.  Of course, this is followed with the Belt of Venus and the earth's shadow taking over the sky before the stars begin to appear.

The trek back to camp in the dark half an hour after sunset wasn't as bad as I imagined.  In fact, my headlamp never left my pack as I was aided by the light of a quarter moon.

Then it was a late dinner and bed, with an everlasting grin on my face from another fantastic evening experience.

You can view more of my images from Olympic NP in my Olympic Gallery.

As always, thanks for looking!  Hope to see you on the trails!
Posted by Don Geyer at Monday, August 24, 2020 No comments:

If you sense some excitement in my prose, you would be correct!  Flower season in the mountains is so short, because the growing season is so short.  These meadows spend the majority of the year buried under a deep snowpack, and only get to come out to play for a couple months out of the entire year! Different varieties of flowers can have different schedules.  Some years these schedules match for the most part, some years they do not. So when everything starts coming together it is reason to get excited!

At Mount Rainier, the flower show arrived a couple weeks ago in typical fashion - by beginning their tour on the east side of the park around Tipsoo Lake and Sunrise.  While these areas are no longer in peak, others are!  Try a hike up to Spray Park or Indian Henry's Hunting Ground or simply enjoy a short walk/hike around Paradise or Mazama Ridge.  Now is the perfect time!

Please remember to be respectful of the meadows.  The growing season is so short that even the lightest of tread can cause irreparable damage.  As my kid's patches used to say (handed out by the National Park Service), "Don't Be A Flower Stomper!"

This year is even crazier than most.  I spent a weekend morning at Sunrise photographing a couple weeks ago.  When I arrived back at the parking lot shortly after 7 am, it was already full.  By 8:30 am, the entrance was already closed and there were cars lined up for a quarter of a mile!  (By comparison, I came up the very next day - a weekday, and it was quite the opposite).  With this increase in traffic comes an increase of pressure on such fragile environments, which we all should be cognizant of.

This is not unique to our area.  It's happening all over.  I just returned from the Sawtooth Wilderness in Idaho and experienced much the same.  A shuttle service I used told me he had never seen such crowds in all the years he has been in the area.  His thoughts were that it was the culmination of cabin fever and not being able to travel.  I can't say that I can argue with his assessment.

Anyway, back to the flowers!  Lupine, paintbrush, asters, common cow parsnip, false hellebore, and so much more!  Or, maybe you know them as the red ones, purple ones, yellow ones - that's alright too!  The importance is the enjoyment!

If you would like to see more images from this area, feel free to visit my Mount Rainier Gallery. 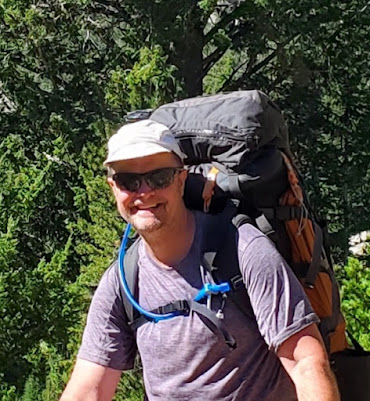 This has been a year unlike any I can remember in recent times.  I've been planning to update my blog for about four months now, but have just been so busy.  My plans and intentions have been there.  I enjoyed some excellent photography trips in May and June, mostly shooting waterfalls on the east side of Mount Rainier.  They were excellent trips that I was very excited to share.  But alas, before I knew it time fast-forwarded to a new month and such a trip was no longer relevant to the times.  This is how this year has seemed to go for me!

So, I thought I would take a moment to simply update you on what has/is happening in my life and move on from there.

Of course, the elephant in the room is COVID-19.  I think this pandemic has changed the lives of just about everyone of us in a major way.  So many things that we have taken for granted in our everyday lives are no longer such.  We are living in different times now for sure.

On the home front, I have two teenage kids who I am extremely proud of.  My daughter is a senior in high school and is spending most of her time applying to colleges.  Our plan was to set time aside to go visit various campuses, but those times have passed.  Now its virtual online tours.  Sigh.

My son is a freshman in high school and just coming off ACL surgery. While doing so, he somehow found a way to break his Tibia while jumping into the air to try and dunk a basketball.  I had never heard of such a thing.  He has it all on video.  His friend was documenting the moment.  The result was immediate surgery to screw it back together.  He is now enjoying the fun of rehab all over again.  I suppose he couldn't have picked a better time with most select sports being cancelled.

Beside all these fatherly responsibilities, I have indeed been finding time to get out!  I've enjoyed photography trips to Mount Rainier NP, Olympic NP and even the Sawtooth Wilderness in Idaho - my first venture into this fantastic mountain range!  I also have many more adventures planned in the coming weeks.

I'm excited to be able to share all these magnificent trips with you in the coming days and weeks ahead.

I hope you are finding time to get out and staying safe as well.