Reflecting on Flower Season at Mount Rainier in 2014

I spent a good deal of time at Mount Rainier National Park in August, searching for vivid displays of flowers.  With the dry year we've had, it wasn't the strongest year for them.

I typically start in Yakima Park at Sunrise in mid to late July, as well as Spray Park and the Tipsoo Lake area.  But these areas were all considerably late this year.  I didn't make it up to Spray Park this year, but the flowers that that did arrive in the Sunrise area did so around the first week August.
﻿﻿
The Paradise area seemed to come into its own around the second week of July.  As with the previously mentioned areas, there wasn't much variety.  Lupine was the predominant flower in most areas.

The exception was Mazama Ridge, where a mixed variety of flowers carpeted the rolling meadows.  Lupine was still the dominant bloom, but paintbrush, asters, pink heather and more could also be found.

I spent several mornings on Mazama Ridge at sunrise, arriving at Fourth Crossing by 4:30 am and hiking up to the ridge in the dark with my headlamp.  I typically shot until about 8:30 or so before retreating back to the parking lot in search of new adventures for the day.

﻿
Surprisingly, I encountered very few photographers each of these mornings - with one of the mornings even being a Saturday.

I photographed at some familiar locations, and also explored some new areas, which I am excited to return to.

While Mount Rainier is the grand spectacle and the focal target of most photographers, the Tatoosh Range can also be very nice.  One morning I purposely kept my back to Rainier the entire morning, focusing solely on the Tatoosh Range.  In many ways, it was a refreshing approach that challenge my vision and creativity.
﻿﻿﻿
Of course, one can also head further up the Skyline Trail for more flower opportunities.  I didn't venture up there this year, as I've spent time up there the last couple of years.  Certainly, there are nice scenes to be had up there.

I also took time to visit other areas around the park, including Comet Falls, the Eastside Trail, the Naches Peak Loop, Burroughs Mountain and Pinnacle Saddle.  These offered a wide variety of photography, which I find keeps things fresh.

One place that has been high on my list the last few years to photograph is the tarn below the summit of Plummer Peak (often referred to as the Pinnacle Saddle tarn).  Previous years I've climbed up to the tarn only to find it dried up.  So, one morning after coming down from Mazama Ridge, I decided to go up and scout the tarn with a quick reconnaissance trip, less camera, for an evening return.

I arrived to find perfect shooting conditions in the mid-morning light, only I didn't have my camera! While frustrated, I found much humor in the predicament.  Lesson learned.  I returned the next morning to make amends.

﻿
For those that aren't familiar with this scene, the reflection isn't obvious.  In fact, many climbers familiar with the tarn from scrambles up Plummer Peak weren't aware of that it offers a reflection.  One actually has to get very low to the ground to see it.

The challenge of the tarn shot on this day was that a sloped snow bank completely covered the ground on its south side.  In order to get low (and at the risk of falling in), I had to lay facing downslope on the snowbank to compose the shot - which I found not to be easy.  But patience and perseverance paid off.

I hope you enjoy these images.  Many more images are available for viewing in my Mount Rainier Gallery.

With fall colors beginning to emerge, there are still many reasons to get up and photograph around The Mountain.  Be sure and take advantage of it!

Hope to see you on the trail!
Posted by Don Geyer at Friday, September 12, 2014 No comments: 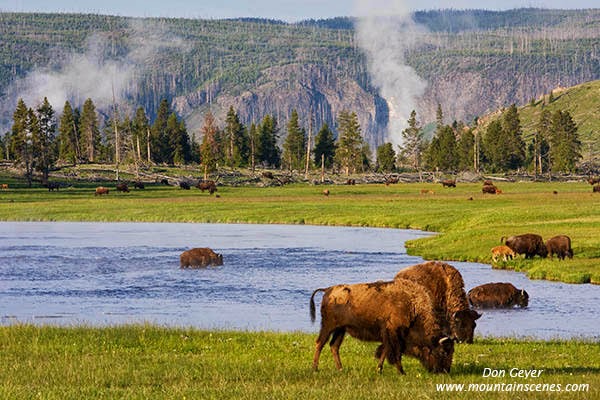 One of the pleasures of visiting Yellowstone National Park is getting to experience the bison in their natural setting, probably the oldest and largest bison herd in the United States.

The herd is actually divided into two sub-herds that are mostly isolated from one another.  The Northern Herd ranges from the northern entrance of the park near Gardner, Montana, through the Black Tail Plateau and into the Lamar Valley.

The Central Interior herd, pictured here, ranges from the Madison River valley into the Hayden Valley, and Upper and Lower Geyser Basin.

The scene of bison, or American Buffalo, in such a wild classic setting as Yellowstone, is unforgettable.  Maybe this is why such an image is so attractive to marketers in the tourism industry.  They want images that reach out to their audience and make them want to be there.  Does this image (or any similar image) make you want to drop what you are doing and go?  It does me.

This image was recently licensed for worldwide usage for a travel client in the travel & tourism industry.  I took it early one morning along the Firehole River along the Fountain Flat Drive in Yellowstone.  It was a pretty special morning, and one that still seems like yesterday to me.  Often, the camera just fell to my side as I watched these animals in their natural environment, even watching them crossing the Firehole River, sometimes just to cross back again a short time later.

I also photographed several young calves as they grazed near mom.  They were a joy to watch.

I will share a funny story about this image.  I took this image (and many, many more) from the side of the road, using my truck as a blind, standing on the driver's side door step and shooting over the top with the door half closed.  I was so focused on and inebriated by this scene that I failed to pay attention to what was happening behind me.  Suddenly I caught movement out of the corner of my eye and saw a huge beast of a bison approaching!  It was on the other side of the two-lane road, walking down the shoulder, but still waaaay too close for my comfort level!  I immediately relocated around to the other side of my truck, shared with the bison in this picture, as safe as that might be!

If you haven't already, I hope you get to have a bison viewing experience of your own at Yellowstone some day very soon.

You may view more images from Yellowston National Park in my Yellowstone Gallery.

Thanks for reading.
Posted by Don Geyer at Thursday, September 04, 2014 No comments: