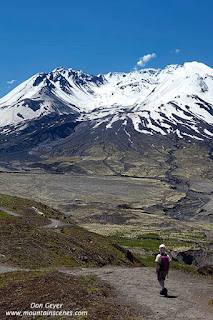 Last Sunday I spent a wonderful time with my daughter down at Mount St. Helens National Volcanic Monument. We hiked the Boundary Trail from the Johnstone Ridge Observatory up to the Spillover saddle, then up to St. Helens Lake.

This is a pretty gentle trail, but does have some exposed areas where its best to hold the hands of young ones. Of course, the views are outstanding!

We encountered snow shortly above the Spillover, at around 4,500'. The snow was patchy until reaching the ridge saddle above St. Helens Lake where it became continuous. The lake itself was still mostly frozen.

It was a fun afternoon on the trail, with round trip stats of 10 miles, ~1,000' elevation gain. Of course, that was a lot of mileage for the feet of a 6 year-old, and her dogs were barking by the time we reached the truck. 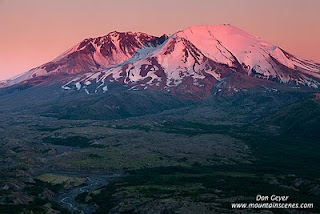 This changed my evening photography plans. I had hoped to backtrack along the trail about 1/2 a mile or so for evening photography. But her feet were done and wouldn't allow that. So instead I found my favorite location near the JRO and looked for an interesting composition other than the one I have shot several times before, which includes an interesting tree for the foreground. I couldn't find anything else that interested me. So I set up yet again to incorporate that dang tree. But I couldn't do it. Not again. 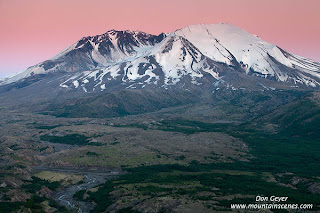 So I packed up and we headed back to the truck to search for a different location.

I didn't search far as I had one in mind: The Castle Lake Overlook. I think it was a good choice. It's further west from the JRO, which takes away the views into the crater. However it offers more of the west slopes of the mountain, which catch the evening light nicely. I think it was a nice trade off. 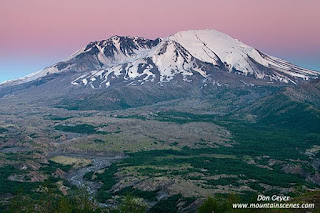 This sequence of pictures demonstrate the progression of the shadow of the earth and the belt of Venus. Just after sunset, a flat blue band rises up from the eastern horizon. This is the earth's shadow, which is cast upon our own atmosphere from the setting sun. The pink above it is known as the belt of Venus. Eventually, the blue band grows larger and larger as the pink disappears, signalling the end to the day and offering a welcome to the stars that will follow.

Nice way to spend an evening, isn't it?

Edit: While photographing the mountain, I met Ray Stinson, an astronomer from Tacoma, WA. Ray showed up with his wife in time to photograph sunset, but his main goal was to capture the constellations above St. Helens after nightfall. He teaches astronomy during the summer at the St. Mary's Visitor Center in Glacier National Park. I look forward to looking him up during my visit there next month. 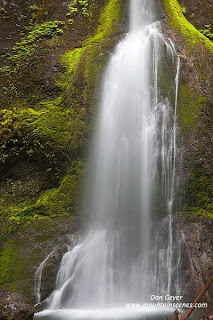 June is a wonderful time to visit Olympic National Park, especially for rain forests and waterfalls. New growth has plants colored in a fresh light green, temperatures are warm enough that snow is melting in the higher elevations to create larger volume flow in streams, and lets face it - chances of rain in June is excellent (especially this year) making for wonderful photographs of such subject matter!

A couple weeks ago I visited two of my favorite waterfalls in the park: Marymere Falls and Sol Duc (or Soleduck, depending on your preference) Falls. Neither one disappointed!

Marymere Falls is accessed from the the Fairholm Ranger Station on Lake Crescent. It's a short trail that begins with a tunnel under Highway 101, then proceeds to travel through the lush forest of the Barnes Creek drainage. It's a beautiful rain forest full of moss and ferns. 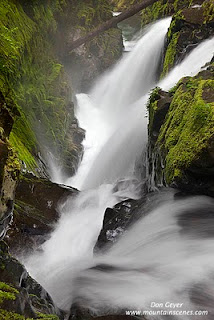 The Sol Duc trail head is probably my favorite trail head in Olympic National Park. It serves as the starting point for such high aspirations as High Divide, Appleton Pass and the Bailey Range - all incredible high country destinations and some of the best the park has to offer.

However, it also offers one of the parks most beautiful waterfalls: Sol Duc Falls.

Sol Duc Falls is reached in a short 3/4 mile hike and is absolutely stunning - especially in June when the snow is melting in the high country. The falls are turbulent and exciting to witness. Many vantages exist, whether from the bridge crossing, one of the observation decks, or a more creative angle.

These waterfalls are a short drive from one another, and definitely worth your time. For an added bonus, the Hoh Rain Forest can be added to the itinerary in the same day.