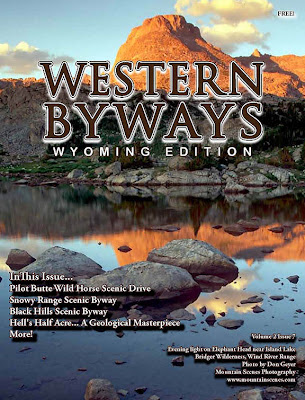 I'm currently editing images from my recent trip to the Canadian Rockies.  Hopefully I will be able to share soon!

In the meantime, I realize I haven't shared any recent published work.  Let's change that with this current cover image for Western Byways - Wyoming Edition.

This image is of Elephant Head reflected in a small tarn near Island Lake.  I'm not sure I would have captured this image had an unfortunate event not altered our trip.

We were only about 2 miles up the trail when I turned my ankle and crumpled to the ground in pain. I couldn't seem to walk it off, and the pain grew worse as I rested. In my mind, we had traveled too far (from Washington) to turn back. We still had 8 more miles to hike to get to Island Lake - our desired camp.

Eventually, with the help of trekking poles, I was able to force some weight onto the ankle and get back on it. We continued up the trail at a snail's pace, probably 1/3 of my normal hiking speed. I found myself focusing on stepping squarely each step; a tedious and disconcerting process.

We successfully arrived at Island Lake late in the day and found a nice campsite. It would be our home for the next few days.

With the ankle injury, there would be no wanderings into Upper Titcomb Basin or Indian Basin on this trip, as originally planned. I had explored both areas on a previous trip and desperately wanted to return for photography. Instead, I focused my photography around Island Lake in mornings and evenings, which offered some benefits and new learning experiences.

What did I do during the middle of the day? Mostly rest and soak my ankle. After all, I had 10 miles of hiking ahead of me to get back to my truck!

We still enjoyed our trip immensely. How could we not with such beauty all around us? After all, we were in the Winds! We experienced beautiful sunrises and sunsets, afternoon lightning storms, and beautiful rainbows.

More images from this trip and others in the Wind River range can be viewed in my Wind River Gallery.
Posted by Don Geyer at Tuesday, October 09, 2012 No comments:

Back from the Canadian Rockies

I'm back from the Canadian Rockies with many stories and experiences to share!  I visited Berg Lake, Mumm Basin and Snowbird Pass in Robson Provincial Park, Tonquin Valley and Macarrib Pass in Jasper National Park, Floe Lake, Numa Pass and Numa Peak in Kootenay National Park, and Lake O'Hara and Opabin Plateau in Yoho National Park.

I logged over 100 miles of hiking, and just over 19,000' elevation gain during my visit.  I met lots of great people, including Mike from Beacon Hill in Seattle, Mike Vincent of Canmore - a professional guide for Chateau Lake Louise, Don & Wendy from Virginia, Scott Forsyth - a professional photographer from Calgary, and more.

I had hoped to see a lot of wildlife (on my terms, of course), but this didn't really happen.  A grizzly bear had recently been spotted near Berg Lake before my visit, but there were no further sightings.  A sow grizzly and her two cubs had been hanging around Macarrib Pass, but I only saw old scat both times I hiked through this area.  A lone caribou was spotted at Amethyst Lake during my visit, but I missed it.  Wolves were present throughout the Tonquin Valley, but I did not actually see them.

Oh, but I do have some wildlife stories to share!

I'll start with my overnight stay at the Portal Creek trailhead in preparation for my hike into the Tonquin Valley.  As I pulled into the parking lot in early evening I saw two porcupines wandering about.  Later that night I could hear them (and likely rodents) beneath my vehicle.  At ~ 1:30 am I was awakened with a loud thud against my vehicle.  I sat straight up, startled.  Was someone trying to break into my vehicle?  The noise was much too loud to have been caused by the porcupines.  I listened further, expecting to hear someone test my door handles.  Nothing.  No cars had pulled into the parking lot.  I eventually used my key remote to turn all lights on my vehicle on - interior and exterior.  Nothing further was heard.

I couldn't fall back asleep right away because I had to pee.  So I got out of my vehicle and walked only a couple of steps to do so.  I returned to to my vehicle and, eventually, was able to go back to sleep - though the mystery of the sound continued to baffle me.

I rolled over at 7:30 in the morning and looked out the window to see how light it was outside.  It was then that the source of the thud was answered.  Just above my head on the rear side window was a distinct paw print from a grizzly bear, with other smudged prints and scratches below!

I returned from my trip to find a note on my windshield, asking me to stop by the Information Centre in Jasper to discuss my bear encounter, and did so.

While camped at Amethyst Lake in the Tonquin Valley, I spent time both nights photographing the stars.  On my second night, I awoke at 1:30 am and ventured a short distance from the tent.  As I photographed, I occasionally could hear something in the trees behind me.  Every now and then I would shine my headlamp over in that direction, but never saw anything.

I sat up, cleared my voice rather loudly, and turned my headlamp on to illuminate my tent.  I soon heard twigs breaking in the distance as whatever animal had been visiting me retreated off into the night.  The next morning I awoke to wolf prints around my tent!

Also while photographing stars my second night, a large bird dove down upon me, pulling up only several feet above my head.  Its wing span was huge and I realized instantly that it must have been an owl.  Its angle suggested it was actually interested in my camera and tripod, which I was obviously standing close to.  Needless to say, it startled me!  I never heard it.  I only saw it out of the corner of my eye as it was only feet above my head.  Those poor rodents at Amethyst don't stand a chance with such a stealth predator in the air!

So, those are my wildlife stories.  The griz experience was pretty scary at the time, mostly due to the mystery.  The wolf experience was scary due to the fact that I assumed it was a cat.  It wasn't until the next day while sharing the story that it was pointed out to me that cats walk with their claws retracted, leaving only pad marks.  The tracks around my tent had distinct claw marks, making them canine.  I assumed they were cat mostly due to their size - they were huge.  I had no idea wolves had such large feet.  Knowing I had a curious wolf follow me back to camp was more comforting to me than to think I had a cat stalking me in the night!

I hope to begin editing images from my trip soon.  Stay tuned!
Posted by Don Geyer at Wednesday, October 03, 2012 No comments: