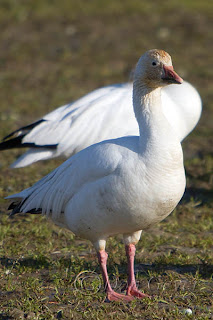 Eagles commonly gather in trees while hawks swoop down low along the fields in search of rodents. Owls make their appearance known in early morning and evening. It is an incredible experience to witness. My first visit to Fir Island quickly deemed it my favorite birding destination in our state to date.

To get to Fir Island, drive I-5 north from Seattle to the Conway, exit. Turn left and head west back over the freeway. Take an immediate right on Fir Island Road, and let your eyes guide you the rest of the way! That's right - Fir Island is about driving the countryside exploring, not looking for a specific destination. 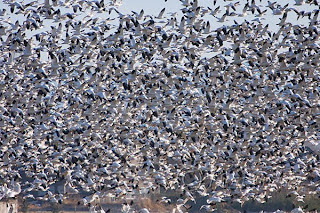 All roads can lead to opportunities. Mann Road is popular. Turn left immediately after crossing the Skagit River for this option. Follow the signs along this road to the Skagit Wildlife Area. As with most wildlife areas, a parking pass is required here. I chose instead to follow Fir Island Road west. The Snow Geese are very easy to find in the morning. Just look to the sky! 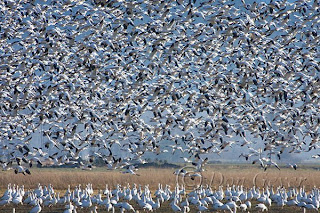 Their tendency is to sleep out on the tide flats at night, then fly into the fields in the morning.With over 10,000 geese in the area, they were easy to spot throughout the morning as as they flew in!

During my visit, the geese began to gather just off Moore Road. They consisted of a few thousand at first, but more kept arriving. 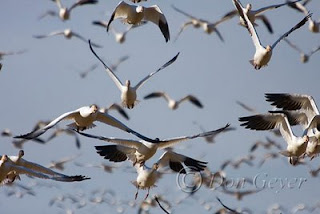 They slowly moved in a northeasterly direction until they consumed the area around Poulson Road.

The geese kept flying in and flying in. Non-stop arrivals. The sky was cluttered with them as the first few images show. The real treat was when a raptor flew by. The entire flock would spook and take flight all at once. 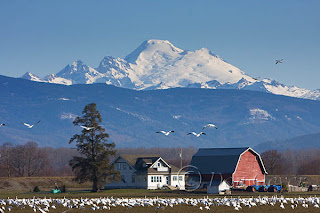 It was a truly amazing experience.

I was fortunate enough to visit on a clear, sunny day. The treat was that both Mt. Baker and the Olympics were out in full view, serving as an excellent backdrop. Truly a Northwest experience.

It was interesting to pay attention to the crowds. Early on photographers clearly were the audience. But as the day grew on, the demographic grew as well. What really stood out to me were the number of international tourists - namely Japanese. I talked to a number of them! 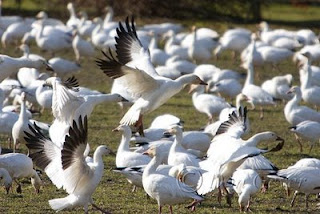 As I mentioned previously, the geese began to slowly migrate in a northeasterly direction. This was key to note. While positioned on Moore Road, their backs were primarily to you. But move ahead to Poulson Road and you watched them come flying in! Their numbers kept increasing as their group size expanded and grew toward you. 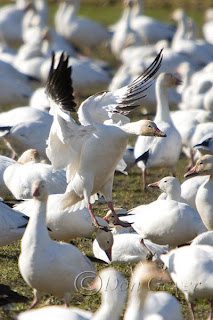 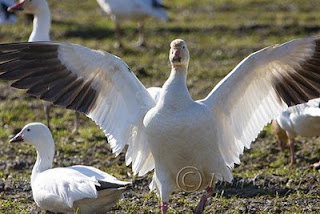 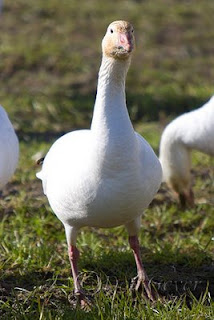 Of course, there were more birds to watch as well. Bald Eagles were apparent in numbers, and hawks would swoop down along the road and fields when you least expected it. 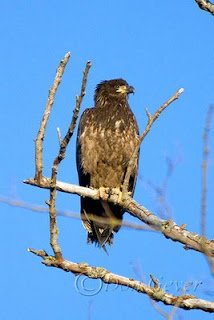 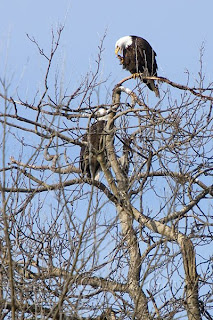 Fir Island is a marvelous place to visit. The opportunities are numerous and begging for your attention! The Snow Geese appear to be hanging around much later than normal years, so it's not too late to enjoy these beautiful creatures.