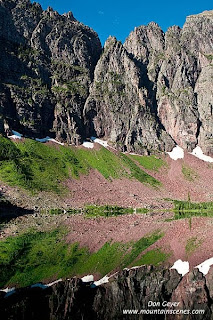 The Dawson-Pitamakin Trail begins at the Two Medicine Lake Campground and climbs to the Continental Divide at Dawson Pass, where incredible views out to the rugged spires of the South Lewis Range await. It then traverses below Flinsch Peak and follows the divide north around Mount Morgan to Pitamakin Pass before descending via the Dry Creek Drainage back to Two Medicine Lake.

This is a highly scenic trip that deserves more than the single day I was able to give it. The loop trip totals 19 miles, and it is very easy to tack on more with various side trips, such as No Name Lake pictured to the left, or maybe Upper Two Medicine Lake.

I got an early start to my hike, heading out shortly before first light. Several years ago I did the hike to Dawson Pass on a climb of Flinsch Peak and there were numerous bear warning signs posted along the trail - a definite attention getter when hiking solo! Fortunately, such was not the case for this visit (again, solo). 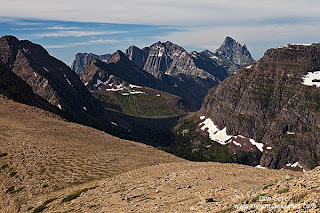 I made a quick side trip to No Name Lake, a very scenic lake set to the backdrop of cliffs in a deep cirque. After a short break, I retraced my steps back to the main trail and followed it up to Dawson Pass and the scenery that awaited me. From the pass, the South Lewis Range stood tall to the southwest, with Mount St. Nicholas dominating the group. High clouds were beginning to creep in from the west.

I oscillated over climbing Flinsch Peak again throughout my hike. I was sporting a broken toe, and had a lot of miles ahead of me. The climb consists of steep, loose scree with some class 4 below the summit. I decided to side with caution and focus on the hike. But on its upper slopes, the temptation became too much. Up I went! 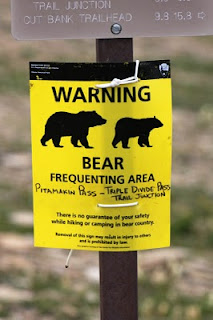 I kept my visit on the summit brief as a system was clearly moving in. I descended upon a herd of bighorn sheep lazily sprawled about the meadows below. The weather was deteriorating fast now. As I traversed below Flinsch Peak toward Mount Morgan, I was certain to get wet as the skies grew black. However, it never materialized.

Just below Mount Morgan, I passed some backpackers who were equally nervous about the the weather. Coming from the other direction, they were heading into it. Their destination was No Name Lake for the evening. Lucky!

I rounded Mount Morgan and traversed to Pitamakin Pass, passing several groups of day hikers - one pair in cotton t-shirts, shorts and sandals with aspirations of completing the 19 mile loop trip. They had a lot of miles ahead of them in deteriorating conditions.

At the pass a bear warning sign greeted me. Fortunately, there were no signs or sightings of it on this day.

I had hoped to photograph Flinsch Peak above Oldman Lake from at or near the pass, but it was less than appealing under gray skies (I was now east of the divide now where skies were less threatening). Instead, I continued my uneventful descent down Dry Creek and back to Two Medicine Lake, completing a 22 mile day with my added side trips. It was a good, though exhausting day.
Posted by Don Geyer at Thursday, September 16, 2010