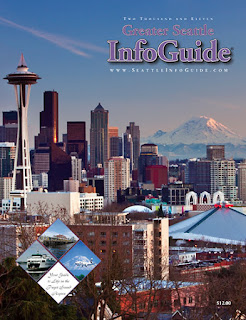 I've worked with Vernon Publications for many years now, and have contributed images to several of their publications.  Recently, I was proud to learn that one of my images had made the cover of their 2011 Greater Seattle InfoGuide.  The image was taken only a couple months ago from Kerry Park on Queen Anne Hill - my first visit to this park.  I also have several images appearing within its pages, including an image of Qwest Field at sunrise taken from Dr. Jose Rizal Park on Capital Hill, an image of the city skyline from Hamilton Park in West Seattle, and an image of Point of the Arches at Shi Shi Beach in Olympic National Park.

The InfoGuide is a great publication to pick up if you are looking for things to get out and do, and is available at most hotels and tourist destinations around the greater Puget Sound area.
Posted by Don Geyer at Monday, February 21, 2011