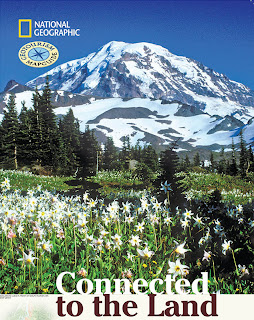 Recently I was preparing tear sheets for some upcoming mailings and I was reminded of this cover image for a National Geographic geotourism map.
The geotourism map series promotes tourist spending in a way that puts their money back into the local economy and helps to sustain and support the community.  An example would be to eat at locally owned and operated eateries instead of chain food restaurants.

This image was taken at Spray Park in Mount Rainier National Park in early summer.  The white flowers are avalanche lilies, one of the first flowers to bloom after the winter snow melt.  I would typically target mid-July for such an image, but it will be much later this year due to the high volume of snow in our mountains.

This image also appears in my book Mount Rainier.
Posted by Don Geyer at Thursday, May 12, 2011