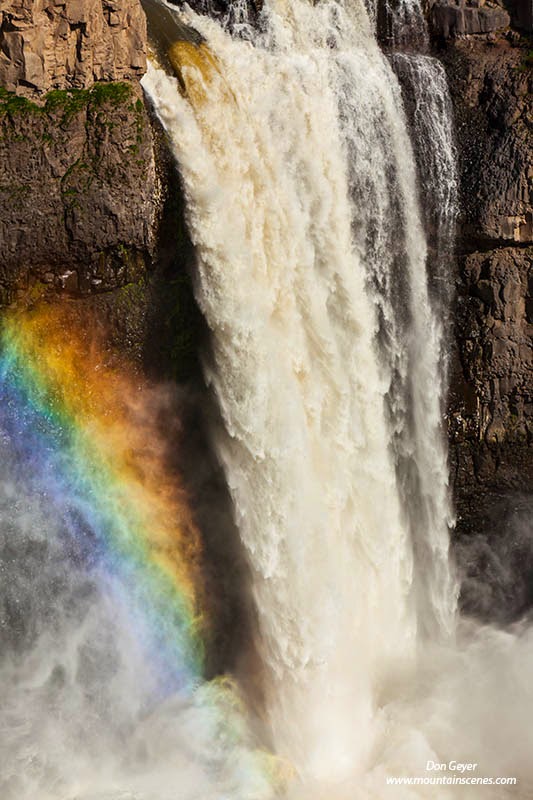 Palouse Falls is a magnificent waterfall located along the Palouse River in the southwest region of Washington State, about 4 miles upstream from its confluence with the Snake River.  It resides in Palouse Falls State Park, a park that provides full viewing access to the falls from a viewing platform and a paved path along the canyon rim.


The falls are 198 feet in height, and owe their history to the great Missoula Floods that swept across the Columbia River Plateau periodically.  Previously, the river flowed through the Washtucna Coulee to the Columbia River.  This coulee is now dry.  During the Pleistocene epoch, the Missoula Floods diverted the river over the south valley wall of the original canyon, channeling a new course to the Snake River, and creating Palouse Falls in the process. 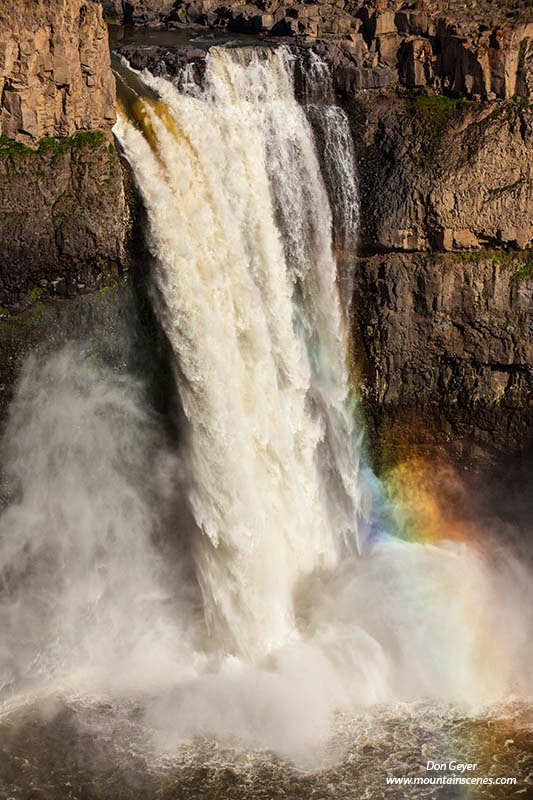 The waterfall seems to be rapidly gaining in popularity in recent years.  A primitive road full of pot holes used to access the park.  That road has been graded and oiled now, and RVs and tour buses can be commonly seen in the parking lot.  Thanks to some Washtucna elementary school students who lobbied the state legislature, Palouse Falls became the official state waterfall of Washington State earlier this year – February 12, 2014 to be exact.  This will surely pick the curiosity of Washington residents who have not yet visited this waterfall.


I find the waterfall is best viewed and photographed in the spring time when water volume is at its peak – April and May are ideal.  Early May brings the addition of wildflowers to the area.  Snakes are also common beginning in mid-April or so (be careful!).  By summer the falls can be but a trickle in comparison. 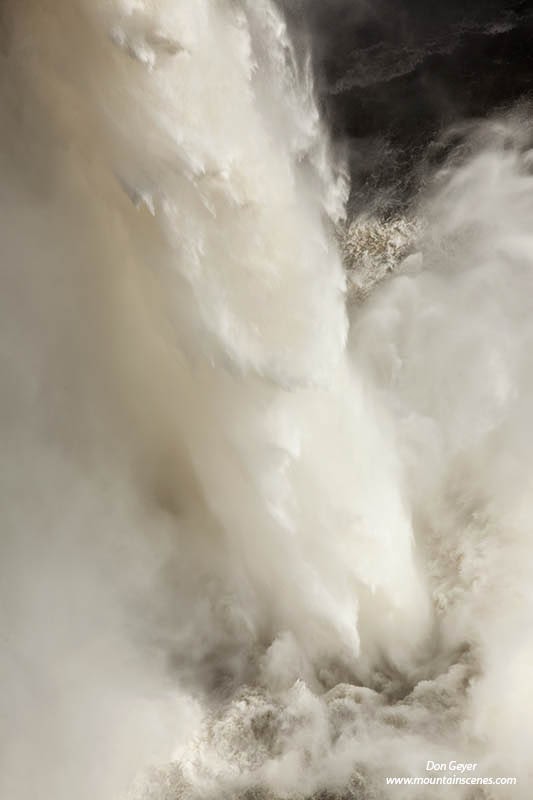 On sunny spring days, a beautiful rainbow forms at the base of the waterfall in mid afternoon.  This is my favorite time to photograph the falls.  You can position the rainbow where you wish simply by changing your vantage point.  Of course, the rainbow also moves as the angle of the sun changes.  Definitely bring a polarizing filter to capture the vibrant colors of this light spectrum.


If you are fortunate to have interesting clouds in the sky in the morning or evening, you’ll have a great opportunity to compose a panoramic image encompassing the waterfall, entire pool and even the canyon downstream if you choose.  In order to capture the full dynamic range, you will need to bring split neutral density filters for this, shoot HDR, or employ the method of stacking images in Photoshop.
I attempted some night photography during my last visit in April, but there was too much light pollution nearby to pull this off.  I would love to hear if anyone has been successful with this. 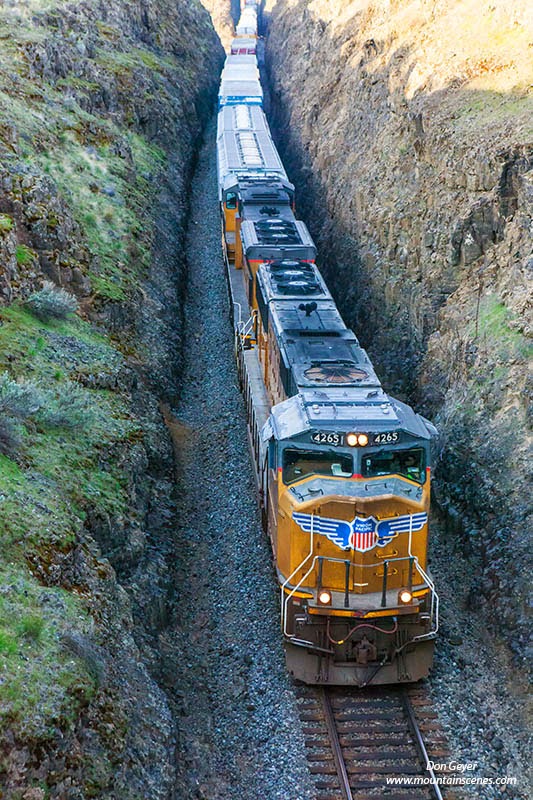 Finally, don't forget to check out the periodic trains, best viewed from the bridge before the parking lot.  The trains run pretty regularly and you can usually hear their low rumble well in advance if you pay attention.  Watching the nearby train traffic light can tip you off as to the direction of the next train.

The railroad tracks are quite the engineering feat.  Since trains require relatively flat track, they can't handle the rolling hills, bluffs and ravines of the Palouse very well.  So instead, a route was carved (blasted) into the plateau to form an open top tunnel.

As I wrote about in a recent post, yellow-bellied marmots are everywhere around the falls and very fun to watch and photograph.  If you missed it and don't see it below, you can find the post here.
You may view more images of Palouse Falls, the rolling hills around the Palouse, and more in my Central and Eastern Washington Gallery.

In the meantime, here are a few images from my recent visit.  Enjoy! 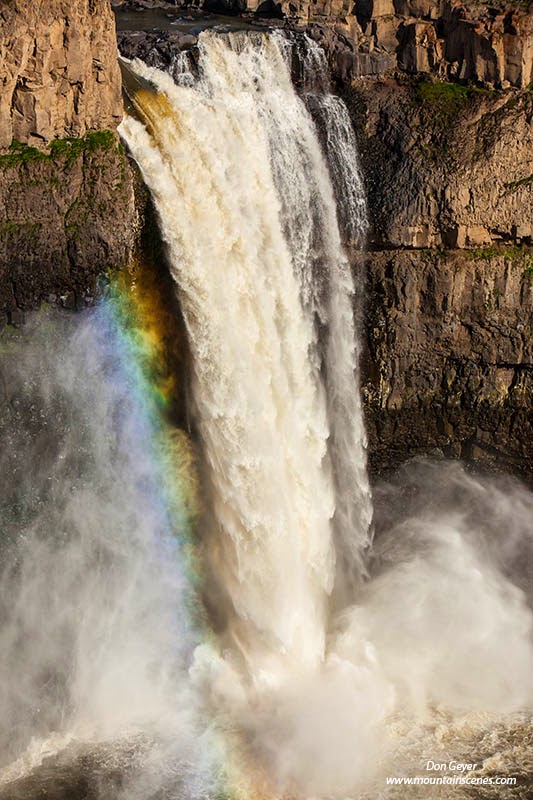 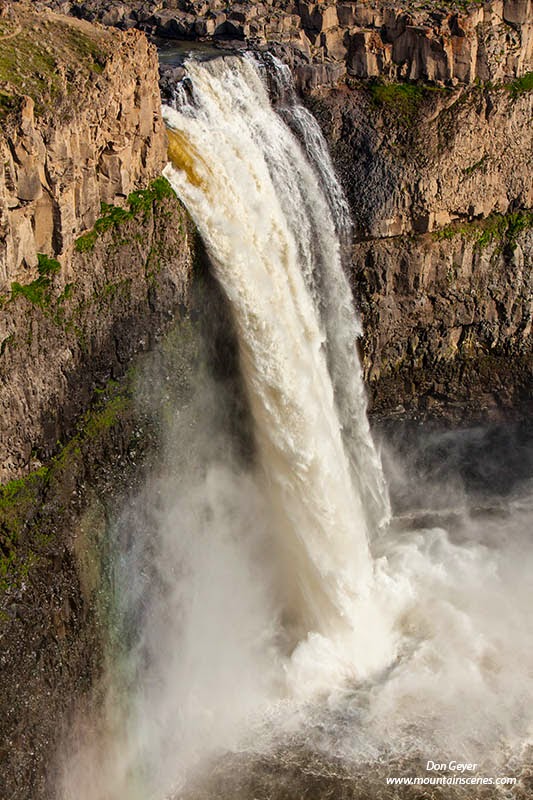