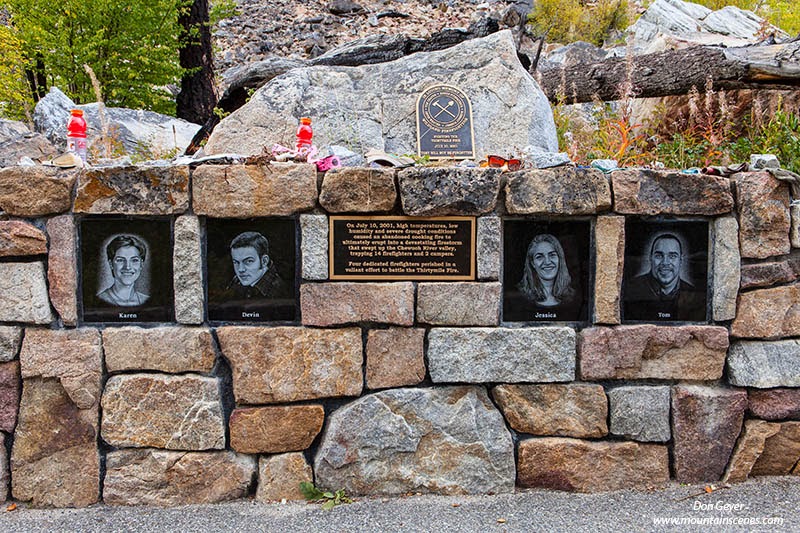 Only July 10th, 2001, four firefighters lost their lives in a fierce fire that suddenly and unpredictably changed direction, trapping them in the Chewuch River Valley.  The loss of innocent lives devastated their families and friends, and the communities they were trying to protect.  It was a sad day in Washington and firefighting history.

I still remember where I was when this devastating event took place.  I was in the North Cascades doing the Eldorado - Austera traverse; a high alpine traverse over several glaciers in one of the park's most wild of places.  We summited four summits in one day on this glorious trip.  We had a high camp at Klawatti col, with an amazing view of Eldorado and the massive Eldorado glacier before us.  Life was grand.  We didn't want to leave.

Shortly after descending, we heard the news.  It took all the wind out of our sails.  Talk about a reality check right to the gut. 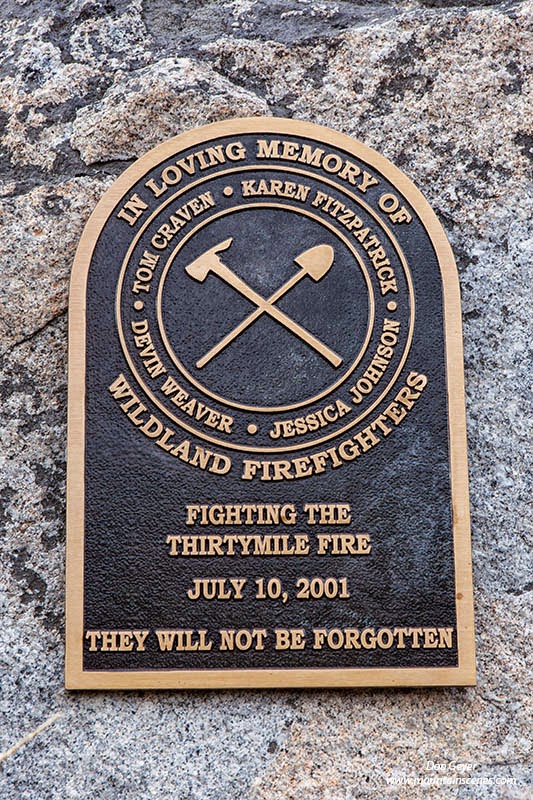 An abandoned campfire was blamed for the cause of the fire, which, in tinderbox conditions, erupted quickly and ferociously into a devastating firestorm that swept up the Chewuch River valley.  Fourteen firefighters and two hikers became trapped when the fire suddenly changed direction and surrounded them, cutting off their escape route.

Down the road where firefighters were running in retreat, the wall of fire advanced at an estimated rate of 125 feet per minute under the strong winds.

This is the short version.  From here, the details get complicated.  I highly recommend visiting John McLean's website.  Warning:  Even his website is "can't put it down" reading.

Fast forward to 2014, I found myself planning a trip to the Pasayton Wilderness for the first time since this historic event.  Call me late to the dance.  While I was excited about my venture into this new land, targeting a lake famed for its larches, I also was determined not to leave without visiting the memorial I had heard about, honoring these brave firefighters.  My trip would be incomplete otherwise. 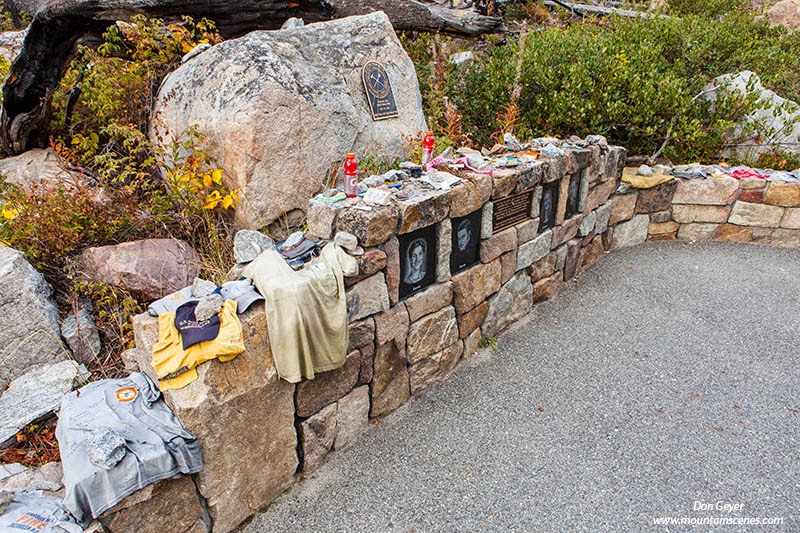 First I must set the stage by describing my hike up Andrews Creek and the sheer awe I felt upon viewing the scene.  I had no idea the size of the fire, or that it even jumped over to this drainage.  As I rounded a bend and got to a vantage where I could see up the valley, there were nothing but burnt trees as far as the eye could see - from valley floor all the way to the ridge top.  It didn't end.  13 miles later as I neared Andrews Pass, the hillsides remained the same; nothing but devastation.  This fire was massive; beyond anything I had imagined.

Back at my vehicle 42+ miles later, it was time to seek out the memorial and pay my respects. 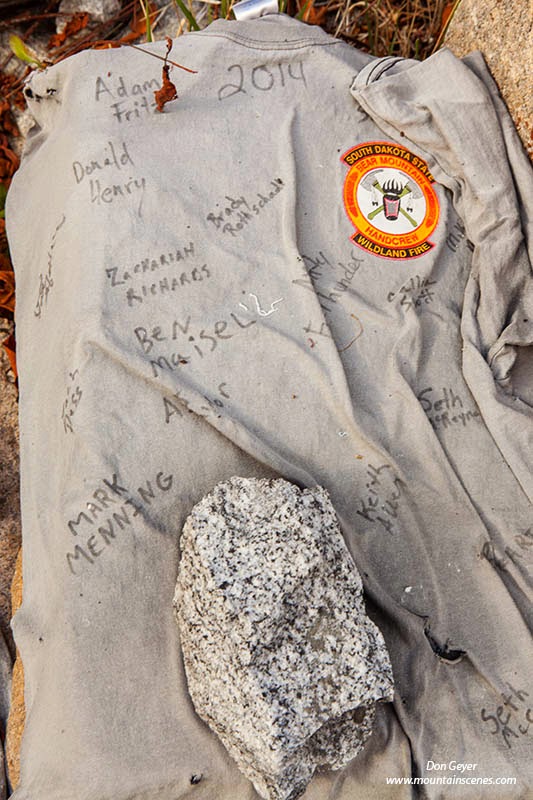 Driving up the road, I first came to the roadside pullout signs.  I don't typically stop for these, but this time I just had to.  The signs were incredible, with amazing photographs of the firestorm and firefighters, and very detailed accounts of the events that unfolded.  I found myself re-reading each one, buying time for my senses to catch up, and trying to fathom the size and magnitude of this catastrophe.

As I neared the last two signs, I noticed the pullout was paved and there was a small walkway leading away.  It was the time of truth.  My heart grew heavy.

As I read the last two signs, I became aware that I was standing in the middle of where the event took place.  My SUV was parked in the exact spot as a van, who's lone occupant survived the ordeal with only a melted license plate frame.  Above me on the boulder field was the scene where the emergency shelters were deployed, ultimately succumbing to the heat of the fire.  Below me was the river, where refuge was sought.  Where did those hikers come from out of nowhere, complicating the survival plan?  It was intense reading. 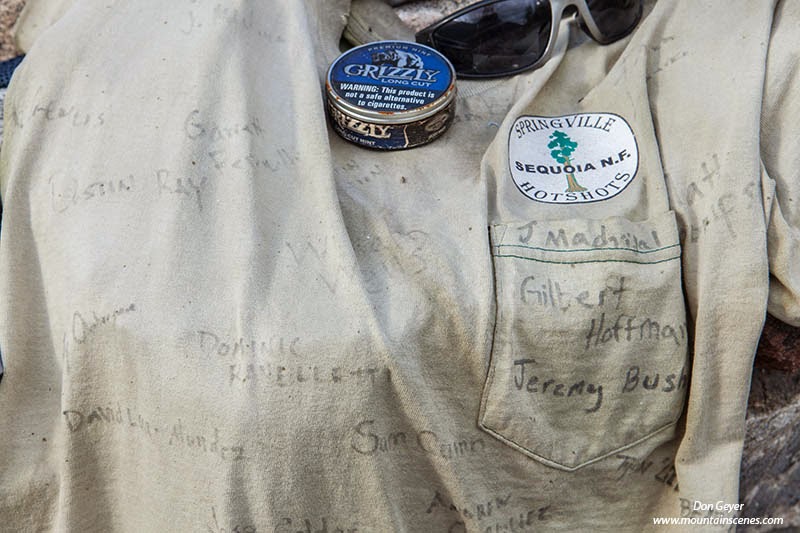 I had not seen pictures of the memorial leading up to my visit, so I didn't know what awaited me.  My expectations were of a very classy, well-done memorial honoring the efforts of the firefighters who lost their lives.

As I rounded the corner of the paved walkway, I was surprised at what I saw.  The memorial was decorated with remembrance items from fire departments, search and rescue organizations, respectful individual visitors, and more.  The sight was overwhelming.

What's more, all these years later and there are no signs of disrespect to be seen.  No graffiti, no vandalism, just an outpouring of love and a collection of undisturbed remembrance items, from signed t-shirts to personal notes and offerings. 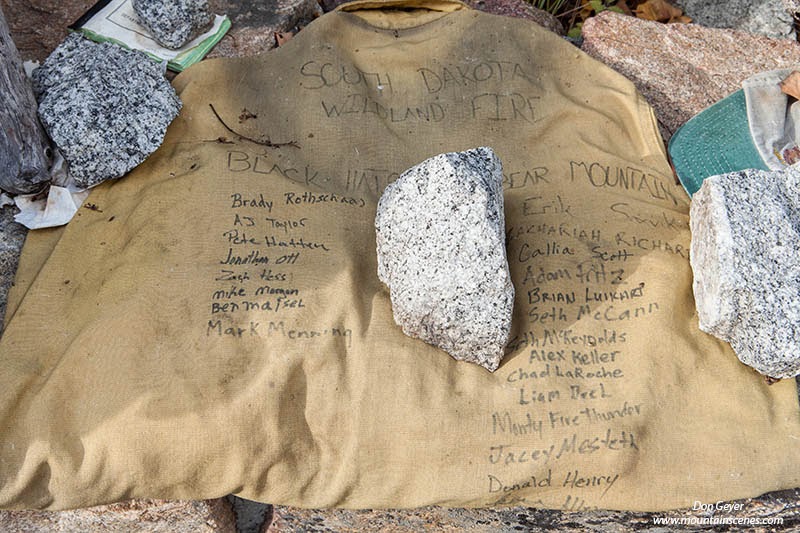 If you find yourself in the Winthrop area of Washington, the Thirtymile Fire Memorial is a must visit.  Your emotions will take over, and I dare you to leave with a dry eye.

The memorial is easily found.  Turn up the West Chewuch Road (county road), which turns into forest service road #51.  The memorial is 21 miles up the road, on the left side.