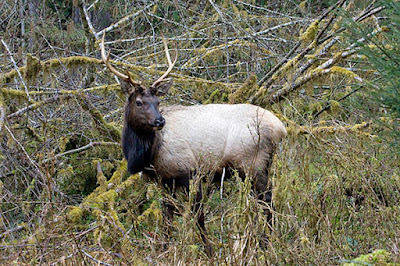 The Roosevelt elk is the largest of the four subspecies of elk in North America, and makes its home in the rain forests of the Pacific Northwest.  The desire to protect this species was the founding force behind the establishment of the Mount Olympus National Monument, which later became Olympic National Park.

This image was taken in early spring near the Hoh River campground in Olympic National Park, where a large herd is commonly found amongst the campsites.  Care must be taken in their presence as they can become aggressive if approached.

This image is currently being used for worldwide editorial use on a website through 2021 to promote wildlife conservation, I am proud to say.