A Visit to Dusty and Ancient Lakes 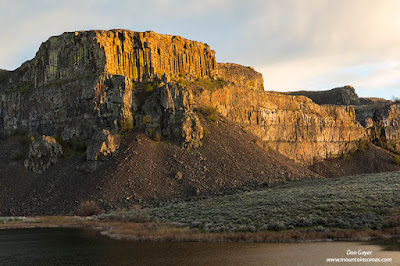 Dusty and Ancient Lakes near Quincy, Washington have piqued my interest for several years now.  This spring I finally launched to the area with my son, and we couldn't wait to hit the trail!

The hikes to both Dusty and Ancient Lakes are very short.  They are both optimal day trips from a hiking standpoint.  But when one weighs in the drive time, such a day could become quite long, especially if planning to stick around to photograph evening light. I elected to make Dusty Lake an overnight destination, and visit Ancient Lakes in the morning on our way out. 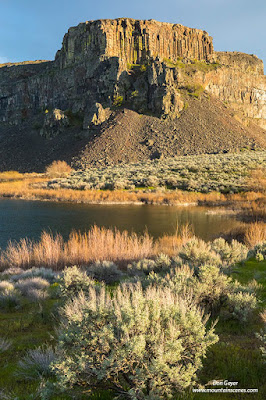 We arrived on a Friday to a friendlier parking lot than expected.  Parking was plentiful, but it filled up fast while we got ready.  I imagine weekends can get pretty tight.  If planning a weekend trip, I would try to arrive early in the day.

We tossed the packs on our backs and began the gentle hike to Dusty Lake, passing the turn-off to Ancient Lakes not far from the TH.  After the junction, the trail to Dusty climbs over a knoll and traverses east to the lake, which sits in a basin surrounded by coulees.  We arrived in just about an hour from the trailhead.

The prime camping area (the only flat area) is located on the west side of the lake on a small peninsula.  There are several tent sites.  Unfortunately, this area was already inhabited by a loud, drunken and foul-mouthed group that we didn't want to be next to.  As it was, we were still too close to them.

There are other sites on the north end of the lake, not as close to the lake (but not far away either).  The best evening photography in the area, in my opinion, is right in between the two areas, so either would work as a photographer's base camp. 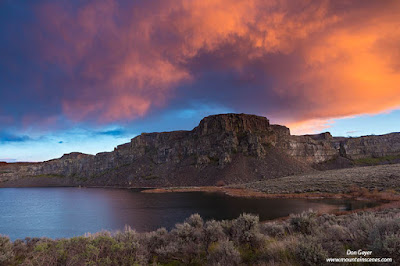 We enjoyed hiking into Dusty Lake under partly sunny skies with beautiful, puffy clouds scattered above us.  As evening approached, these clouds began to disappear, much to my disappointment.  But then, just as the sun began to sink lower in the sky to the west, some beautiful clouds began to develop over the area, turning orange and then pink as the sun lay to rest.  It was a beautiful evening.

The next morning I awoke early to catch sunrise, but not much happened.  Still, it was a beautiful morning to experience.


After a quick breakfast, we packed up camp and headed out.  We found a trail that short-cut the traverse around the coulee that separates Dusty and Ancient Lakes, and followed it to the point it descended into the basin.  We then left it and travelled cross-country due north to pick up the main trail so we could drop our packs and pick them up easily on the way out. 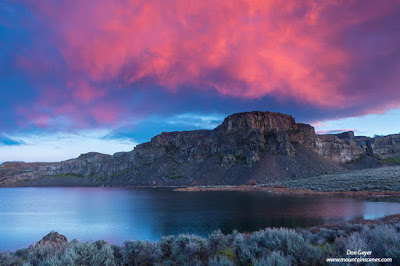 Ancient Lakes were beautiful and there was a lot to explore.  There were a lot more people camped around these lakes, but the area is so large that it swallows people up and pleasant camping can be had.  This is definitely an area I will return to to spend an evening.

After an hour or so of exploring, we returned to our packs and finished our journey back to the TH.

This is tick and rattlesnake country, so we remained very observant and aware. We found two ticks on our gear while camped at Dusty Lake - one on our tent and one on a pack.  We did not encounter any snakes, even during off-trail travel.  This was in early April, and I think it was still a little cool for them (temps reached freezing overnight).

Photography Hints:  It's a short hike with little elevation gain - you can bring the kitchen sink!  If you think you might use it, bring it!  I mostly used my 24-70mm.  I did bring my 14mm lens in hopes of some night photography, but the skies remained cloudy overnight.  You will want to bring your split neutral density filters, unless you plan to bracket and use HDR back home.