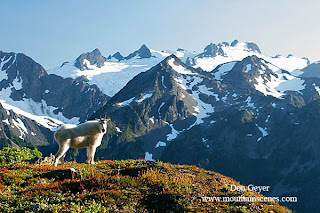 A couple of years ago I spent 8 days combining the Bailey traverse with the Skyline High Route in Olympic National Park. It was a solo trip, and a very rewarding one at that.

This image was taken on day 2 of the trip from an area I jokingly refer to as 32 Goat Basin (not terribly far from 11 Bull Basin - yes that is the official name). Of course, the number 32 represents the number of salt-craving goats that rapidly descended upon my camp as soon as my presence was known. They were an aggressive bunch and a real pain in the butt to be honest. Any time I ventured from my camp, they would converge upon my gear for a nibble. Unfortunately, one succeeded in chewing some holes in my bivy sack. I wouldn't learn this until a couple of days later while caught in a storm!

I've had several images published from this trip, but this one of the goat perched in front of Mt. Olympus has by far been the most popular. In fact, it will be in the pages of an upcoming outdoor magazine. I would like to say that I am getting the last laugh from this whole affair, but I can't say that I am laughing yet!

Edit: I will be visiting this area again next month for a climb of Olympus with some friends. If successful, it will be my fourth time summiting this beautiful peak.
Posted by Don Geyer at Wednesday, June 17, 2009