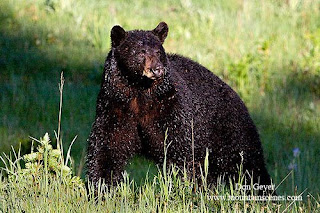 Yellowstone National Park is such a phenomenal place for so many reasons. Whether you're into geysers, hot springs, waterfalls, canyons or wildlife, there is something there for you.

Having been there many, many years ago, I knew what to expect as far as the geological features were concerned. What I didn't expect was the abundance of wildlife present and available for photographing. 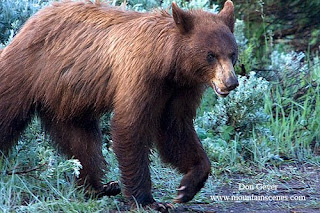 We entered the park via the north entrance from the town of Gardiner, and spent our first couple of days in the Mammoth Hot Springs area. Here I was fortunate to stumble upon a sow and yearling one morning. It was quite fun to watch them interact while eating flowers in the meadows. Word had it that a larger black bear was also in the area. Might it be the one we saw that very evening traversing over to and through the terraces above Mammoth Hot Springs? 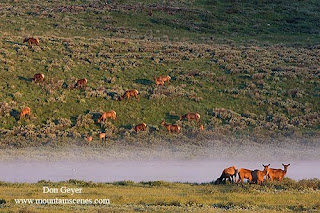 Swan Lake Flats was an excellent place to find elk in the early morning before and shortly after sunrise. The steam rising from the lake made the experience very special.

Elk could also be spotted often along the road between Swan Lake Flats and Mammoth Hot Springs, or even resting in the lawn of various residence and businesses in Mammoth Hot Springs! Incidentally, driving south toward Norris found them in numbers as well. 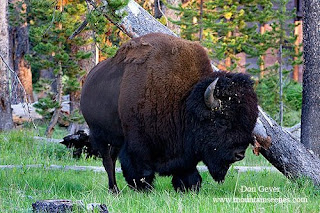 Of course, we didn't have to venture far from camp to see wildlife. We had our own resident bison right in Indian Creek Campground!

Another regular place to see bison in the northwest section of the park was down by Norris Campground. Of course, practically any place in the park is a safe bet to bison!

I spotted coyotes along the Upper Terrace Drive early one morning. With the size of the rabbits I saw in the area, this should not have been a surprise. 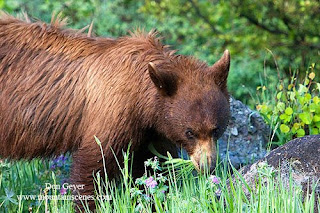 Of course, the black bears were my favorite animals to photograph in this section of the park. It's interesting that black bears and grizzly bears do not share territory. In the event that they do meet, the black bear were usually flee unless cornered. If it's cornered, the confrontation will almost always prove fatal to the black bear.

I guess the fact that so many black bears were hanging around the Mammoth Hot Springs area suggested we were likely safe from grizzly encounters! 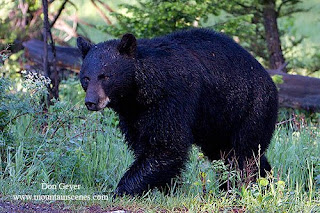 We also drove by a sow and cub(s) sighting near Roosevelt one afternoon.

Stopping at Pebble Creek Campground for a restroom break, we were treated to a bull moose trotting across the river straight toward us before venturing through the campground to a field on the other side. The sighting was so unexpected that by the time I got to my camera gear he was already nearly gone!

Another treat was seeing a white wolf relaxing in a meadow quite far off the road near Canyon.

Our stay in Canyon allowed me to hike with my 5-year old daughter to the summit of Mt. Washburn. This was a real treat for the both of us! This was supposed to be a popular area to see big horn sheep, but we were not so fortunate during our ascent. Upon reaching the lookout tower, we learned they were hanging out only 1/4 mile down the other popular trail approach. 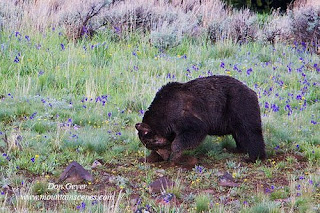 However, we were running out of time and elected not to pursue this option. I believe this is the only common animal we did not see during our visit to this park.

It was during our stay at Canyon that I was fortunate to photograph a grizzly bear near Dunraven Pass for over 1-1/2 hours. I actually had to walk away from this special experience in order to get back to camp in time for check-out! It's too bad. It would have been fun to have had the morning sun light up the area. 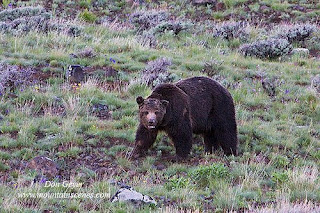 The grizzly sighting was quite special to witness. Bear researchers were also present, not to mention several other wildlife photographers with some serious lenses. What I learned by listening is that this particular bear was actually wearing a collar and was numbered. He had been wearing the collar for so long that his fur mostly hid it. He was also significantly scarred. Weight estimates for this bear were 800-900 lbs. 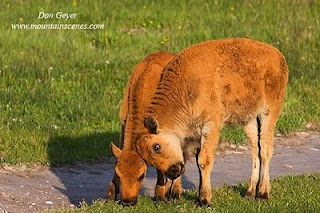 There were other special moments for viewing wildlife too. The Madison area provided excellent opportunities for bison, including a large herd at Fountain Flat. This was a special area because it offered more than just your typical bison standing next to the road. I got to watch calves interacting with one another as well as numerous bison crossing the river, including a cow leading her two calves across. The thermals in the area also made an intriguing background, in my opinion. 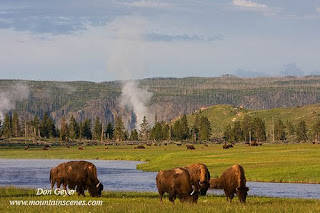 I was probably most nervous while photographing here, believe it or not. The herd was so numerous and so spread out that you had to watch your back. I would use the hood of my truck to lean on to help stabilize my camera while photographing the bison, keeping my vehicle between me and them. A quick glance over my shoulder would catch other bison approaching me from behind, a couple of times uncomfortably close - enough to make me change to the other side of my truck! 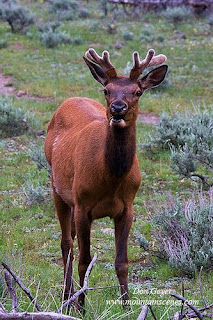 Of course, elk and pronghorns were also common in the area. This young bull elk was photographed just off the road near Madison, while pronghorns were spotted near the Whiskey Bend Picnic Area.

Yes, Yellowstone National Park is synonymous with wildlife! Opportunities for viewing abound around every bend in the road at all times of day, though morning and evening can be particularly special.

Note: I will be leaving in the coming days for a summit attempt of Mount Olympus in Olympic National Park. Upon my return I will post some of my landscape photography from Yellowstone National Park (as well as hopefully share images and details from a successful Olympus climb - wish me luck!)