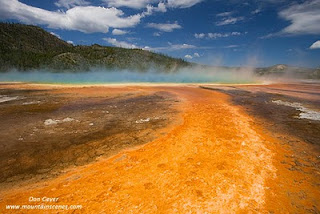 "Hell's Half Acre", as it was colorfully referred to by Rudyard Kippling in 1889, is still alive and well, and a deservedly popular destination in Yellowstone National Park!

Technically, Midway Geyser Basin is actually part of Lower Geyser Basin. But due to its isolation, it has established its own identity over the years, and deservedly so. It possesses two of the largest springs in the world: Grand Prismatic Spring and the now dormant Excelsior Geyser. Excelsior Geyser used to be the largest geyser in the world, erupting nearly 300 feet in the air before 1900. Today it is considered a hot spring discharging more than 4050 gallons of boiling water per minute. 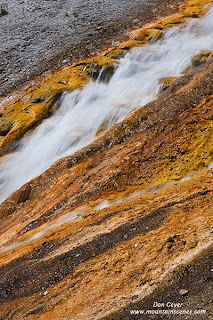 The loop trail trail at Midway Geyser Basin is about a mile long and a very easy walk. It immediately crosses the Firehole River (which isn't a bad place to hang out) and climbs up the south bank of the river. Along the way you pass the colorful runoff stream from Excelsior Geyser Crater. The crater emits a large amount of steam. Though I tried to play with photographic possibilities, I didn't come away with anything successful.

Further along the trail are the colorful Turquoise and Indigo Springs. Turquoise Spring has an underground connection with Excelsior Geyser. When Excelsior was active, Turquoise lowered nearly 10 feet. In June and July, Turquoise can be surrounded by a beautiful display of purple gentians. 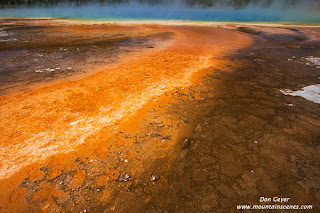 Moving further along the trail one comes to the climax of the tour - Grand Prismatic Spring. Grand Prismatic is easily the highlight of Midway Geyser Basin, and probably my favorite spring to photograph due to its rich, vibrant colors. The brilliant oranges are extremely captivating as you search out compositions from along the trail.

The patterns are also quite intriguing and fun to play with. They are numerous and very accessible from the boardwalk. Allow your imagination to run wild! 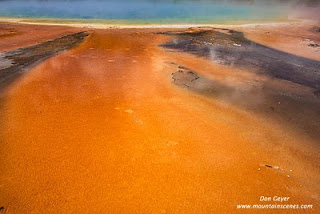 The colors of Prismatic are very dependent on the temperature of the runoff water. Yellow bacteria appear in the hotter water near the spring, while red, orange and brown are prevalent in the cooler water. Colors and patterns change from year year as a result. I've seen some beautiful shades of red in published images of Prismatic. My visit witnessed mostly oranges and browns. 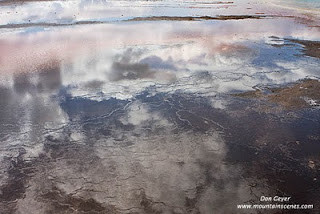 Whatever the color, the attraction of Prismatic will likely win you over. Take your time and enjoy this beautiful spring. I encourage you to visit mid-morning for the best light.

This is the fourth part in a series I am posting from our wonderful visit to Yellowstone National Park last June. I hope you are enjoying.