The Canadian Rockies are comprised of four adjacent National Parks - Banff, Jasper, Kootenay, and Yoho - and a distant Waterton.  They also include several provincial parks, including Assiniboine, Hanber and Robson.  They are heaven north of the border and one of my all-time favorite destinations - one of Canada's true treasures.

Of all the parks, Banff is probably the most popular.  It offers a wide variety of attractions and photography possibilities; whether it's nature landscapes, manicured parks, man-made structures, people & wildlife,  or a combination of all the above.

I recently returned to this park after a lengthy hiatus and spent a week photographing throughout the park, even venturing into Yoho for a day.

It was a fantastic trip with mostly great weather.  It included summiting a 9,000' peak with my 9-year old daughter, several family hikes, lots of wildlife (including a grizzly bear near our campground) and photographing most of the major attractions of the park.

The most popular area in Banff National Park outside of the Banff town site is the Lake Louise vicinity.  Lake Louise and nearby Moraine Lake draw visitors by the thousands every day, and for good reason; the scenery is outstanding and both offer excellent hiking trails.  Parking can get crazy by late morning at both.

Mount Victoria, Mount Lefroy, Temple Peak and The Ten Peaks offer dramatic settings in the area, whether it is hiking to their base, climbing to their summits, or catching their reflection in a lake. 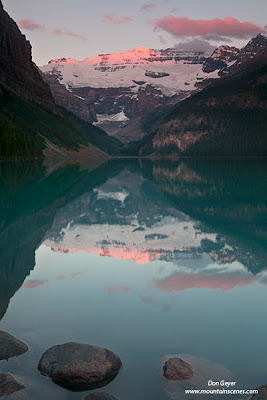 One of the beauties of this area for photographers, besides the scenery, is that the best time to photograph the area is in the early morning. So it is easy to beat the crowds. Arriving at both Moraine Lake and Lake Louise in the early dawn hours found me nearly alone as early light struck the nearby peaks.

The humorous thing I found about Lake Louise was that both mornings I spent photographing there was that the masses would show up just about the time I was packing up to leave. Visitors from the lodge came running down to the shore, often in their pajamas and bathrobes, and the tourist buses would start arriving in the parking lot.

Moraine Lake never produced such crowds during my visit.  Typically I would see a couple of other photographers during the prime light (arriving after me), and a few more would arrive before I packed up.  Returning mid-morning would find larger numbers, but nothing crazy.  The crazy numbers are found mid-day!

﻿
﻿ There are plenty of hikes to do in the area once you are finished capturing first light.  From Lake Louise, the Plain of Six Glaciers trail follows its north shore and climbs well above the lake to a prominent viewpoint of Mount Victoria.  There's even a tea house waiting for you near the end!

Another fun trail is to Saddleback on the opposite side of the lake.  The adventurous can scramble the final 1,500' to the summit of Fairview Mountain.

Paradise Valley is another popular destination, though bears can be a problem.  Such a warning was in place during our visit, requiring a group size of four or more.

Moraine Lake offers one of the best hikes in the area, especially in larch season (late September).  Larch Valley and Sentinel Pass are excellent destinations.  Again, group size restrictions can be in order due to bear activity, and were during our visit.

The Lake Louise Campground makes for an excellent base camp.  It is very close to both Lake Louise and Moraine Lake for easy and quick access, and is also centrally located to attractions further away.  The campground is alongside the Bow River, which affords excellent views of Mount Temple.  It is also located in prime grizzly bear habitat, necessitating an electric fence around it (it's not as obtrusive as it might sound).  The proof was in the pudding during our visit, as I returned to camp one morning to spot a mother grizzly grazing in an adjacent meadow.  As I later learned, she had two cubs.  I was not fortunate enough to see them.

I spent many evenings driving the Bow Valley Parkway between Lake Louise Village and Castle Mountain Junction.  This is probably one the best wildlife viewing areas in the park.  I photographed numerous black bears, bull elk, and the largest osprey nest I've ever seen, complete with young!

﻿
﻿ Of course, there is also Castle Mountain, which received pretty dramatic light most every evening as afternoon thunder storms cleared.  Most people seemed oblivious to this though as they were too occupied driving up and down the parkway in hopes of seeing a bear.

Near Castle Junction, several very large bull elk made daily appearances.  They were most likely to be seen in the evening, but not limited to.  They were quite a treat to see.


The drive up the Icefields Parkway is not to be missed.  There are photography options every stretch of the way.  An entire day or more can easily be spent along this highway, especially if continuing all the way Jasper.

Peyto Lake is an often photographed lake along the parkway.  It requires a short but rather steep hike to the famous viewpoint, and you will not be alone at mid-day, which is considered the best time to photograph it.  I actually didn't have much luck at mid-day due to overcast skies and flat light.  The image here was taken in early morning as a storm crept in.
﻿
﻿ I was fortunate to time my visit during flower season, and was amazed at the flower show along the Icefields Parkway.  They lined the road as far as I ventured, and offered unlimited photography opportunities.  My favorite area was around Bow Lake.

On a day that cloudy skies and showers were forecast, we headed over to Yoho National Park and visited Takakkaw Falls.  Though Banff was mostly cloudy, Yoho offered us bluebird skies and pleasant hiking to the base of the falls.

Backpacking destinations will include Berg Lake (Robson), Tonquin Valley (Jasper), Floe Lake and the Rock Wall (Kootenay), Lake O'hara (Yoho) and Lake Maggog (Assiniboine). All but Tonquin Valley will be repeat visits for me.  My itinerary has me hiking 136 miles (not including side trips) with just under 10,000' gain during this time.

Upon my return I hope to have a lot of images to edit!  I also hope to edit my wildlife images from my previous trip, and to construct a new Canadian Rockies gallery on my web site.