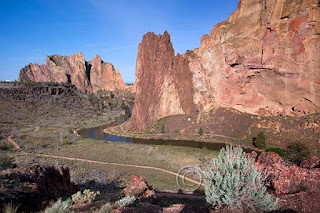 Smith Rock State Park is probably best known as a world-famous rock climbing area, but actually offers some incredibly beautiful scenery as well. Here near the town of Terrobonne, the Crooked River meanders through this canyon at the base of Picnic Lunch Wall and the Smith Rock Group.

I awoke at 3:00 am and left my campsite near Painted Hills for the drive to Smith Rock State Park and the hope to catch sunrise. 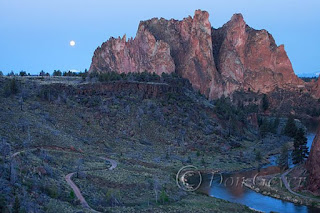 Coming from the east in the dark of night was challenging at best as there were no signs. Even the entrance to the park is signed for westbound traffic only, and it was only after seeing a glimpse of it in my rearview mirror that I realized I had missed the turn!

I arrived in plenty of time for sunrise, and awaited the arrival of Long Nguen, whom I had met at Painted Hills. He had scouted the park the day before. For me, this was a last minute bonus addition to my trip, and I had no opportunity to scout it. 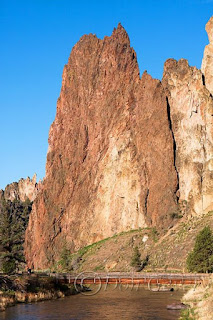 I set up for first light near the picnic area, and immediately noticed the full moon working its way toward the Smith Rock Group to the east. Being in a canyon, it was hard to sense where exactly the sun was going to come up and to understand where first light would hit. When Long didn't arrive, I knew I likely wasn't in the best spot.

After making the best of the situation, I jumped back in my truck to scout the park. As I pulled into the bivy area, I saw Long walking thru the parking lot on his way back to his car. He was glad to see me. He shared his sunrise spot with me and I headed out to scout it for a future trip, agreeing to meet up with him later down along the river. 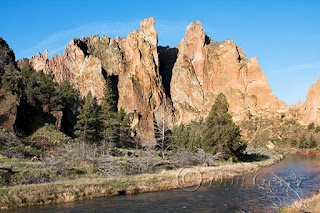 The spot was nice indeed. I returned back to my truck and drove back to the picnic area.

I descended down to the river, crossed the bridge, and enjoyed the scenic stroll along the trail in both directions. Rock climbers slowly began to arrive on the scene. 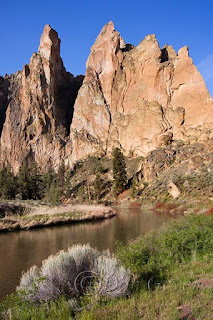 The park is well signed with warnings about rattlesnakes, and I stepped carefully - especially off trail and in tall grass. I didn't come across any.
After a while I retreated back across the bridge to wander the other side of the river. I figured I would likely run into Long again here as he had some pools in the river picked out that he hoped to get some reflection shots in. I took my time with a few more compositions as I made my way west. Soon, I found a Singh Ray lens cap on the ground and new Long must be close!

Sure enough, Long had found a nice composition of the Smith Rock Group at a bend in the river and was relaxing along the hillside, absorbing the scene as much as he was photographing it.

We hung out here for a considerable amount of time talking and enjoying the scenery before us. It was quite nice to know that in such a popular park it was possible to still experience some solitude - at least in the early morning hours it was! 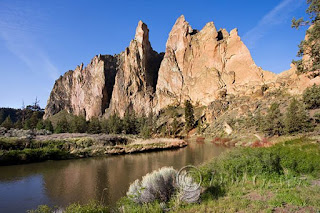 It was time to wrap up our morning. Long had to catch a flight back to Seattle, while I had a long but scenic drive back home ahead of me. We said our goodbyes, and looked forward to looking each other up once we arrived home.

The drive home was very scenic under blue skies, and well worth it.

I do plan to visit Smith Rock State Park again very soon - maybe next spring? I highly encourage you to visit it too. 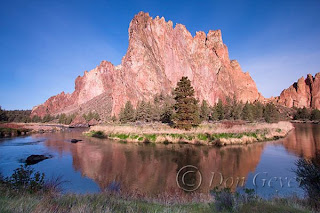