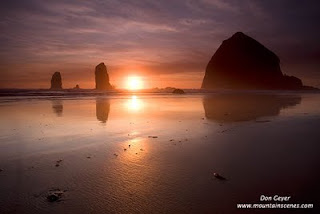 Canon Beach is a nice getaway spot on the Oregon Coast that offers a little something for everybody. There are numerous lodging opportunities including hotels, resorts, cottages, bed and breakfasts - well, you get the picture. The restaurants are numerous, unique and offer excellent food. There is plenty of shopping to be done around town. Oh, and it happens to offer fantastic scenery!

We stayed at The Hallmark Resort, which I highly recommend. It is located immediately above the beach overlooking Haystack Rock and offers excellent family accommodations. Dogs are welcome! 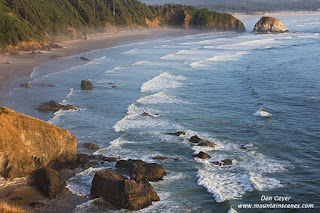 If having the beach at your doorstep isn't enough, a quick 10 minute drive thru town brings you to this viewpoint of Crescent Beach from Ecola Point in Ecola State Park. It's a fantastic place to spend a late afternoon watching the surf crash against the rocks below.

If you like rugged sea stacks, another excellent visit within the park is Indian Beach. The sea stacks are numerous and quite scenic. There is also a short 1.5 mile trail takes you to Tillamook Head. However, I didn't have time to investigate this trail. 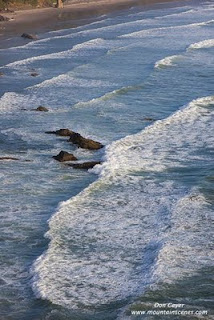 I elected to spend the afternoon photographing from Ecola Point, where there are numerous vantages along the short, paved trail. Composition possibilities are numerous.

As evening approached, a layer of fog began to roll in. This can be seen in the horizontal image above, though it became much thicker as evening wore on. Typical August conditions as I've been told.

Shortly before sunset, I retreated back to Canon Beach. I grew somewhat concerned at hearing the fog had overtaken the beach and blocked the sun from view. I arrived to find this to be true. However, the sun refused to be denied and soon returned. 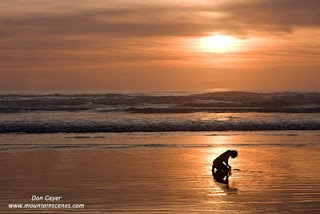 As I walked along the beach to catch up with family and find my composition for sunset, I was taken by this scene of a young girl playing on the beach. Canon Beach offers a lot of opportunities to photograph people doing various activities. Throw in a sunset and it becomes that much more interesting!

Speaking of interesting, what had been a blue sky all day now had enough clouds to catch the sun's final light and provide some attractive colors. 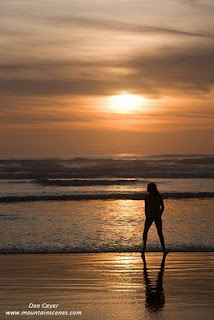 I made my way south along the beach past Haystack Rock to a point where the sun would set between it and some complimenting sea stacks. I then looked around for interesting things to place in the foreground - rocks, driftwood, patterns in the sand, reflection possibilities, etc.

This is when everything started to go wrong. First was the discovery that my filter pouch was unaccounted for (see prior post). Next was that my camera started operating erratically, or often not operating at all. It stopped allowing me to adjust settings, despite confirming I was still in manual mode. Upon turning it off and then back on, the shutter would release on its own. It would not allow me to depress the shutter. I changed the battery - no difference. I changed the memory card - no difference. I detached and re-attached the lens - no difference. Meanwhile, the sun was setting nicely! 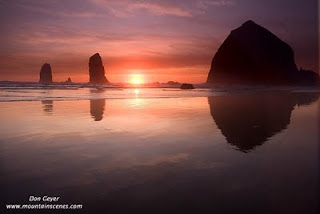 As I came to the realization that something had gone terribly wrong and that my camera would need servicing - and how sunset on the first day of an extended photography trip was incredibly bad timing - I frustratingly began to pack up my gear in defeat.

This is when embarrassment set in. 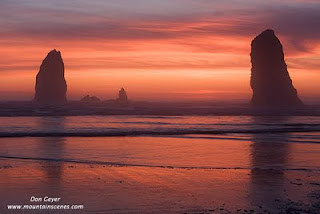 While lifting my camera body off the tripod I felt a tug below my foot. In the dark of sunset, my remote had become buried upside down in the sand and I was partially standing on it. This was overriding everything I was trying to do on the camera and explained the auto shutter release at start up. I quickly disconnected the remote cable and discovered I had regained control of my camera - just in time for sunset!