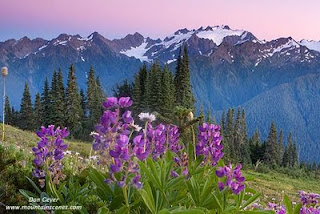 I thought I would share some images that will be appearing in an upcoming 2011 calendar. Both images are from special trips.

The image to the left was taken last year on a backpack to High Divide with my good friend David Crowe. We camped very near this spot and enjoyed views of flowers and peaks from near and far, plus the occasional bear. It was a fun trip that included visits to Seven Lakes Basin and Bogachiel Peak.

The image was taken after sunset, in a flower meadow, laying on the ground, with my camera only inches off the ground. A breeze was present and it took great patience to wait for opportunity - something photographers know all too much about. 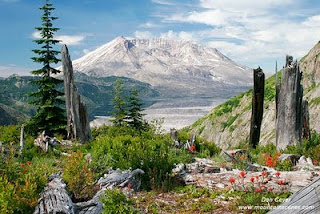 The second image was from a special backpack I did with my dad in Mt. St. Helens National Volcanic Monument. The image was taken from Norway Pass during our exit - totally unplanned. The image represents the chaos that is Mt. St. Helens. Though it isn't my favorite image from the trip, I think it works well. Apparently the publisher does too. It's a re-use, having appeared in their 2009 calendar.

Next up: More Oregon Coast!