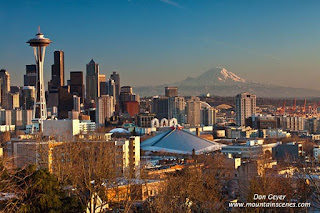 2010 ended on a high note for me. I finally visited a park that has been on my list for the last several years - Kerry Park. Wow! There is a reason for it's popularity. Actually, I should say reasons - plural.

Kerry Park is one of, if not the, supreme view of the city skyline that Seattle has to offer, and includes the bonus of Mount Rainier off on the horizon. The visual is magical. 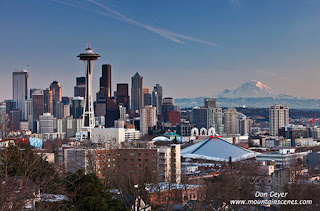 Access to the park was pretty straight forward and easy, even on such a day as New Year's Eve. It is certainly a popular spot, but as with many tourist locations, people come and people go. Too crowded for you? Wait 10-15 minutes.

Actually, the people were a large part of the experience for me. They were from all parts of the country, and the world. The entourage of guests came on foot, on bikes, personal vehicles, small tour buses, and even stretch limos. And everyone I talked to were inebriated from the views and enjoying the moment. 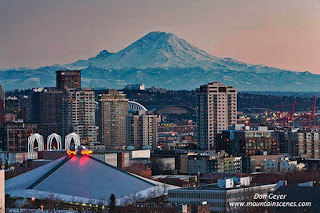 It was fun sharing stories with people from Georgia, while offering to take pictures of a family from South Carolina. The spirit was festive!

Kerry Park is not very large. In fact, the "park" is mostly down below viewpoint, and requires a steep descent to visit. Kerry Park as photographers know it is more of a paved viewpoint, roughly 100 feet long. The best vantage if from the far west (right) end near the steps that descend to the play area and basketball court. 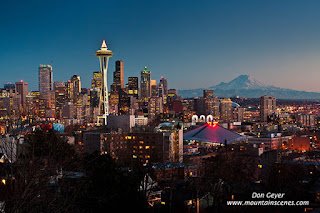 I saw very few photographers during my visit. Much fewer than expected, anyway. And I could count the professionals on a single hand.

I recommend arriving at Kerry Park about an hour (or slightly more) before sunset. Not so much for the potential crowds (and it will help), but for some of the best lighting. I found the vantage from Kerry Park best while Mount Rainier and the foreground still had some light on them, and then well after sunset when the city lights transformed the setting. 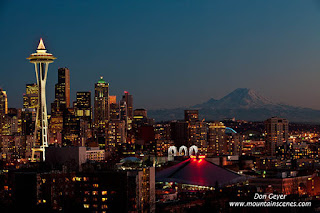 The scene becomes much different after dark, both through the lens and the number of people standing around you. The city lights change the setting from one of stretching panorama under a pink hue of the evening sunset to one of festive nightlife. Both are quite intoxicating. It's a scene that is hard to pull away from. But as the skies grow darker, you realize the best images to be had are already on your flash card and it is time to move on. 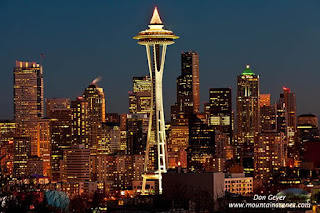 A visit to Kerry Park at sunset should be a must on every visitor's list. I strongly recommend it.

There are other magnificent places to view the city as well, including Alki Point and other vantages from West Seattle. Make sure you check them all out!

Next, I will share yet another new vantage of the city that I found quite impressive. Stay tuned!