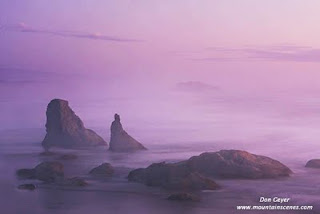 This final installment of my Oregon coast trip has been a long time coming. But then Bandon, Oregon is certainly worthy of such a wait, offering my favorite beach of the entire Oregon coast.

Bandon is known for sea stacks – lots of ‘em. Choices for compositions are countless and it is hard to pick just one for that dramatic sunset. It was interesting to watch other photographers search out their position of choice and set up, only to find “something better” while waiting, and move again. I must include myself in that group. 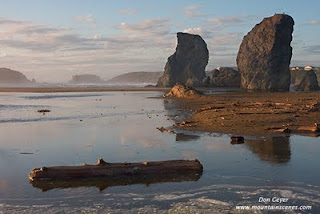 The first day of my visit had been mostly cloudy, but showed signs of improving towards evening. A thick bank of clouds to the west left sunset in question and one could only wonder what kind of show, if any, might unfold. There seemed to be enough sucker holes in the clouds to invite a very dramatic sunset. Those same gaps in the clouds could also close and dash my hopes. 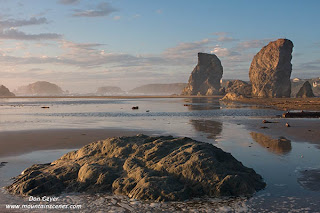 As it turned out, the sun played peek-a-boo as it set, but mostly remained hidden. It did cast a beautiful red sheen on the incoming tide. Such a reflection would have been brilliant on the still waters of a lake or tarn. But on the moving waters of the ocean in low light, it was difficult to render the scene as the eye witnessed it. 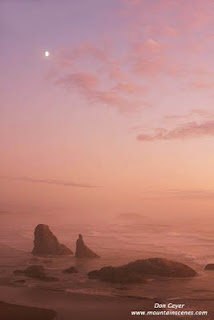 As soon as the sun dipped to the west, the fog quickly began to roll in and created some very interesting light and texture that I wasn't expecting. In fact, the light was much more impressive after the sun went down. A bright moon high in the sky added to the scene. I had mostly retreated back upslope to the parking lot, taking a direct approach which shielded my view to the south. When I popped up onto the pavement, I immediatley clambered into position and watched the fog roll in low while higher clouds appeared and disappeared above. Soon the fog enveloped the area and the evening show was done. 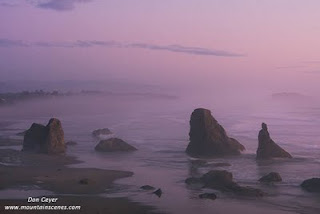 I returned a second night, but experienced nearly the opposite weather pattern. The day had been sunny and completely cloudless. As evening approached, so did a very thick marine fog. I couldn’t see from one side of the parking lot to the other by the time I retreated back to camp. Such occurance can be common in the summer months.
Posted by Don Geyer at Tuesday, October 27, 2009