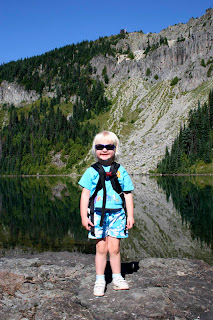 Introducing children to the outdoors for the very first time is an incredibly rewarding experience for a parent. Helping them hoist that tiny pack onto their shoulders and seeing their face beaming with pride in anticipation of the unknown is something to behold. The images become permanent in your mind for years to come.

Shortly after my daughter Karissa turned 3 years old (top photo), I took her on her very first hike up to Eunice Lake and Tolmie Peak in Mount Rainier National Park. I think she had to take three steps for each of mine. I really didn’t think she would make it much further than the first mile, and made certain to bring the child carrier for when she exhausted herself. 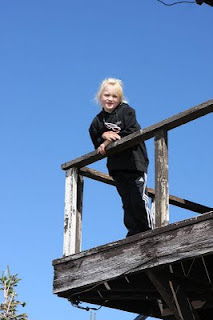 Though tired, she hiked all the way to Eunice Lake by herself – 2-1/4 miles! After wading in the lake together and taking a long food break to restore her energy, I asked her if she wanted to go back to the car or continue on to the lookout. She thought about it long and hard before finally saying, “Daddy, I want to go to the tippy-tippy top!” And that she did.

Blueberries were the only thing working against me on that day. One was all it took to get her hooked! She arrived at the lookout to a celebratory greeting from everyone, and was offered many summit treats by all for her effort. Her smile was absolutely radiant, and as a dad my pride in her was indescribable. 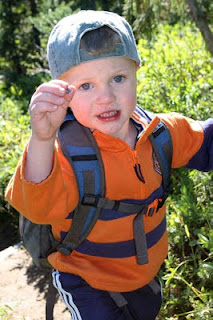 That memory has remained with me as a favorite for the last three years.

My son Brendan turned 3 back in March and I have been waiting for September to roll around to share the same experience with him. The difference this time was that we were joined by his sister, some friends and my dad. This was a recipe for a fun day.

I learned early on that just 6 months difference in is considerable. At 3-1/2 years of age, Brendan’s endurance was much stronger than his sister's had been. Though, his weakness for blueberries was just as problematic! 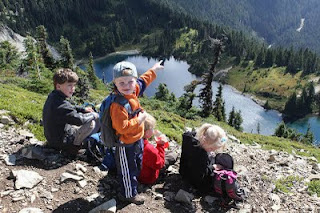 When Brendan arrived at the lake, he couldn’t understand why we were stopping. His eyes were glued to the lookout above and he wanted to get up there. He played for a short period near the water, but after repeated urgings to get going, he hoisted his own pack on and began heading up the trail – on his own. His determination was impressive! 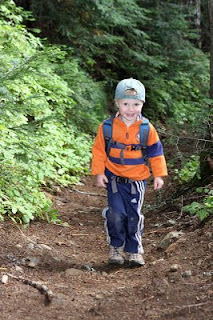 It was fun watching the kids hike together and watch their eyes as they discovered new things. Halfway along the lake they found a newt sunning itself on the trail. They were totally fascinated with this! It was also quite fun to watch them slow waaaay down along the trail while scanning for blueberries – their eyes sweeping the brush in search for the delicacy. And when they found one, all hiking came to an abrupt stop! 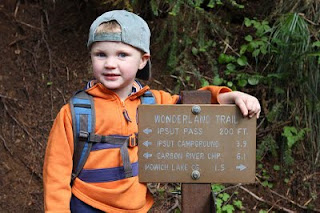 The hike was a complete success and enjoyed by all. Brendan not only completed the 6-1/2 miles round trip by himself, he was first back to the car at the end of the day. And yes, daddy was proud as ever once again. 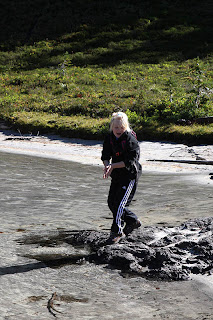 Karissa is 6 years old now (second picture from top), and this once challenging hike for her was merely a stroll this time. Seeing how much she has grown since that first hike was really something. But it was also fun to watch her enjoying the area just as much, if not more, than our first trip.

If you share my love for the outdoors and have kids, I highly recommend getting them out and introducing them to it at an early age. Their abilities will likely surprise you and the moments will be cherished for a lifetime. Fall colors are alive in our mountains right now - a perfect time. Go!
Posted by Don Geyer at Thursday, October 08, 2009