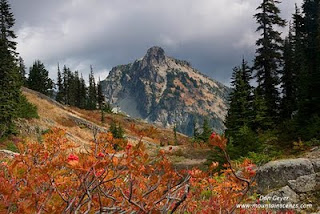 Rampart Lakes have held a special place in my memory ever since my first visit in 1996. For that visit, I arrived at the trail head in the dark of early morning and began my hike with headlamp in hopes of being at Rampart Lakes in time for somewhat early light. Colors were profuse, and I benefited from a recent dusting of snow on the higher peaks in tandem with a blue sky.

This trip would be a little different, though no less memorable. 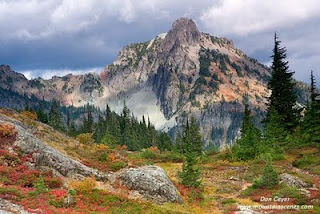 I elected to do the trip as an overnight this time, wishing to enjoy both final and first light at the lakes. The forecast was for sunny skies the duration of my trip. As you can see, that was far from my experience.

I drove to the trailhead under mostly cloudy skies, and began my hike under similar fashion. As the morning wore on, the sun began showing signs of dominance with its bursts of light thru the weakening cloud layer, but it was not to be. By mid-afternoon, the clouds showed signs of strengthening. 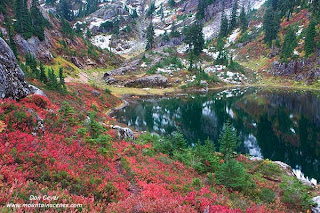 As most photographers know, light cloudy skies are desirable for foliage as the diffused light brings out their natural colors. This served me well on close-ups of the lakes and the upper basin.


My goal, however, had been to photograph the recent snow on Rampart Ridge above the lakes, as I had in '96. I was never afforded the opportunity. When the lakes were lit, the ridge was dark and vice versa. Dem's da berries. You work with what you are dealt. 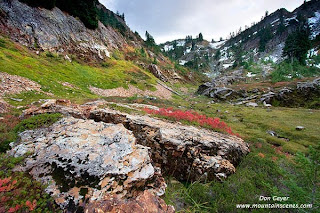 Discouraged by the clouds, I decided to climb up Rampart Ridge for a birds eye view of the area. The upper basin above the lakes was actually quite interesting, especially on my descent. The clouds above were working their magic on the sun's rays. Of course, I didn't realize it at the time. I planned to put my camera away for the evening. 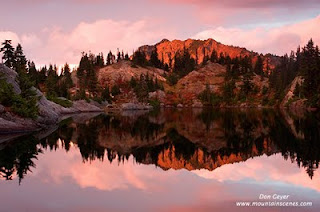 I descended back to camp and waited. I watched the sky and the peaks around me. I've learned not to give up to soon, but these were thick clouds above. I had my doubts. The day had shown many signs that a predicted storm may have been advancing on the area quicker than forecast.

Still, I scouted compositions close to camp, which was placed in a most desirable location for reflections shots. Then I waited some more. Things did not look promising. I began cooking dinner and preparing for the cold night ahead. 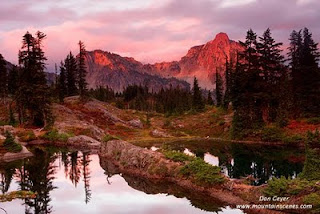 Then it happened. The sun dipped below the cloud cover to the west and cast its magical light on the peaks around me. I raced to my camera, which was set up on Alta Mount. Hi Box was hid from me behind some trees near camp. After a couple of minutes of shooting Alta, curiosity got the best of me. I'm glad it did.

Nature often surprises you. I went into this trip with set hopes, and was totally thrown a curve. But in the end, I came away smiling and feeling blessed with what I had been served.